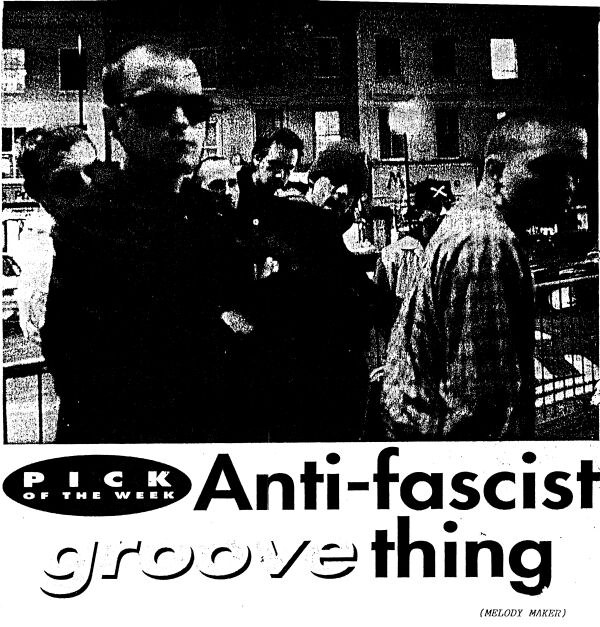 BLAGGERS ITA are no-hopers on paper. Quite apart from a daft name, attempting to bring together 15 years' worth of diverse pop styles with a radical polemic to boot, combining punk, hip-hop, ska, grunge, sampling and lots of shouting--shurely shome mistake?

Au contraire, dear reader. Just imagine an unholy mix of The Clash, Public Enemy, early Dexys and Napalm Death cranking the BPMs up to about 796 and then blowing the place apart. Not literally, of course, although the look of shellshock on the faces of the mild-mannered kids here tonight may have suggested otherwise.

Blaggers ITA will annoy the living crap out of purists and musical snobs of all descriptions, but that's not their only recommendation. They avoid the pretentious and embarrassing tokenism of so many crossover bands and, instead of creating a wacky mess, each influence adds an extra dimension without getting ideas above its station and distracting from the central attack.

The brutally energetic rap and rant exchanges hit you first, backed up by constant stabbing rhythm, crunching guitar, chattering samples and blasting horns. Bad craziness delivered with more energy than a year's supply of Lucozade sport--it sure beats the shit out of Inspector Morse for entertainment.

Don't choke on your brown rice, kids, but Blaggers ITA might just have the potential for Levellers size popularity, substituting the folky pretensions and hippy liberalism with an inventive musical approach and revolutionary politics. So soo them sharpish, or you won't be able to moan when all your mates jump on the bandwagon.

Blaggers ITA--I still don't know what the hell it means, but you know it makes sense.

ONE from the British working classes on the Rodney King decision. "The Way We Operate" mixes police sirens, rap, radio excerpts, trumpets, politically charged guitars and a vocal which vaguely resembles Strummer (only with passion) to create a potentially explosive mix.

Energy, anger, organisation AND tunes. What more do you f****n' want? Get out there and RIOT!

THE BLAGGERS
THE ASTRONAUTS
at the BRISTOL BIERKELLER
18th MARCH

The 'blaggers' were a totally different kettle of water, baggy t-shirts, short hair, I expected happy Monday, rave sound, prepare to be blasted, clash on speed? EMF with talent! A total mindfunk? This 7 piece commanded completely, give no shit and take no shit. Psyched up and psyched out, the music was pre-adrenalin with a good dose of ska, beat rhythm, rap with nu up tempo groove, the 2 vocalists abandoned the safety of the stage and went straight for the jugular out front, they didn't satop for a moment. They used 2 vocalists to good effect, feeding off each other like rabid pit bulls and got even the usually unmoveable Bristol crowd up and dancing. The lyrics were very political with a strong stance against racism and even going as far as doing the Clash's Guns of Brixton using their own, maybe stronger, lyrics.

They quote Sham 69's 'If The Kids Are United'. But DON'T WORRY. They are not an 'orrible mock-working class Oi! band (not thick, ugly or smelly enough). The record rifles with horns, dance hall toasting, blatantly-thieved Madchester riffs (you naughty Blaggers!), gliding guitar, Geordie rapping and a reworking of The Clash's 'Guns Of Brixton'.

This six-track mini-LP shows the Blags halfway to becoming a truly class act. They have the pop-ears to write righteous chart classics, they have the ovaries to pick, nick, steal, skim and dick with the spunky bits from every hip micro-genre happening and they have the musical skills to put it all together.

Which they do here, twice. The angry mongrel 'Emergency' and the scudding 'Bastard Chilling' are both reminiscent of the early, dancy Mondays. Unlike the bands you like, the Blags' problem is not too little speed and too much E. Rather the reverse.

"Safe", as I believe the current street vernacular has it. (7)

From their first moment on stage, it was evident that the Blaggers ITA want no part in reminisence, their time is now. Kicking off with a few hardcore numbers, they took control of an unsuspecting audience, with flailing limbs and manic guitars, then somewhere amidst they mayhem onstage, found space to rap, rave and play the trumpet, creating an overall sound which smacks of the 25th of May finding energy to headbutt Conflict and mug a few juicy chart bands on the way.

But stealing riffs isn't what this band's about. Songs dedicated o the anti-fascist cause, abortion issues, and the Tottenham Three litter the set. These are real street preachers, avoiding the sermong they get the message across with a serious sense of humour, skillfully juggling political issues and entertainment without dropping either. The band left the stage singing "We are Blaggers, no one likes us" and anthem obviouslt directed at the music business, rather than their audience, who were left crying for more.