'Cause I stupid (anyway)

We're dropouts from high school
We rock'n'roll
And shoot pool

And we're stupid - Stupid all the way

Though they consider themselves the "other wave", Crime is probably the most underheard and over talked about new wave band in America. To be sure, in Britain they're even more of a mystery. There's a chance that their two independently made 45s - "Hot Wire My Heart" b/w "Baby You're So Repulsive" (released in December 1976) and "Murder By Guitar" b/w "Frustration" (August 1977), will be released in Britain by Rough Trade, with a third to follow. Right now, though they're both "obscure and real hard to get", which Johnny Strike blames on California's outdated musical tastes. The truth is, Crime's music/attitude/presentation methods are enough to challenge anybody's notions of radical 1980s rock and roll.

Frankie Fix (guitar, vocals, songs): "Most bands around here are rock bands. We play rock and roll, and there's a difference."

Johnny Strike (guitar, vocals, songs): "It's like the progressive thing--like progressive rock, which we're totally against. We'll get better, but we'll never lose the rawness. We'll just come up with different songs and different ideas."

Ron the Ripper (bass): "They're too hung up on progressive rock, all these bands. We work on simplicity, and that gives us more ideas to work in the overall sound and style of this band. It's that simple."

Hank Rank (drums): "If you listen to the progression of the material, there's definite stylistic changes. We can't say we're gonna add a pipe organ next week, or a change like that, but the changes have occurred and will continue."

As notorious as their live set is, until recently Crime has averaged only one performance a month at San Francisco's Mabuhay Gardens, where the audience regularly defies California's laid back reputation by pogoing away their punk fantasies to 30 minutes of Crime's brutally fast and noisy rock and roll. "We tried playing other clubs", says Johnny, "but we were too loud for them." 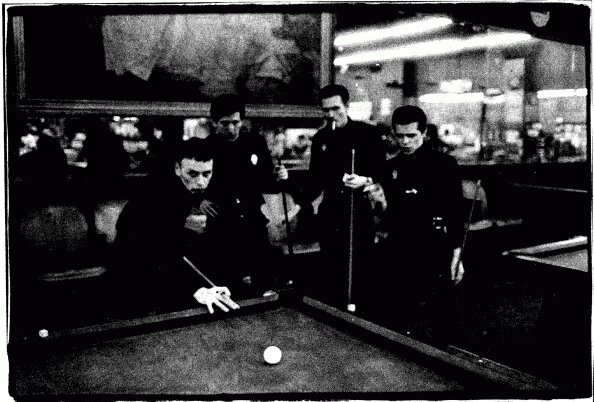 Loud is only half of it: Crime's records are two of the most daringly uncommercial I've ever heard, and in concert they seem even more frantic and less melodic, though technically tight as hell. Johnny and Frankie terrorize their guitars - there's no other way to describe it. The first time you seem them you may come away wondering if they played the same song over and over, but completely convinced that the sameness of the songs has a lot to do with the lasting impact of seeing Crime live. (Don't think their defiantly anti-musical stance hasn't helped them win over San Francisco: the backlash against mellow rock was bound to occur sooner or later.)

If Crime's approach to music sends the hippies running for the door, it's their highly developed expressions of style that separate them from new wave rockers on both sides of the Atlantic. First off, the packaging of their singles and the posters pasted all over San Francisco announcing their shows are incredibly eye-grabbing. The band itself, as you can tell from the pictures, tries hard to get across a dynamic visual image on stage and off. In fact, for the setting of this interview Crime chose one of their favourite hangouts, a gymnasium sized pool hall which caters to serious pool players (the pros), and where I'm told thousands of dollars change hands nightly. The patrons didn't appear to mind the presence of four young men wearing black police uniforms--the street gear Crime feels "comfortable in".

"See, we got our own trend", explains Frankie. "Most of the bands, they all look the same. We don't want to be like them."

Johnny adds, "Or they're ripping off the British in their look. We were trying to get bands together when the English punks were, too. We were just here and they were there. But we don't--we set trends rather than follow them."

The time has come to ask the inevitable question. By being so flash in your packaging and appearance, don't you risk being called posers?

Johnny: "See, that word means something different to us."

Frankie: "It means something different to everybody. I think everybody poses whether they realize it or not."

Johnny: "It's like when we played the Whiskey (in Los Angeles) and everybody was doing the strangulation and the, uh..."

Hank and Morris: "The pogo."

Johnny: "Yeah, and we told them to do the poseur. We told them just stand there and get your best pose, and that's it. Everybody does it, right, at some time or another. And it's nothing to be ashamed of. We aren't consciously posing all the time, but we do pose occasionally, sure."

We agree that in Britain the word poser has more to do with jumping on the punk bandwagon than seeking to express original visual images, as seems the case with Crime. (Also, in terms of credentials, Frankie and Johnny say they've "been into this music for a long time.") Still, the distinction could easily get lost between San Francisco and London, as it has between San Francisco and New York...

"All they have to do is listen", insists Hank, the newest member of Crime. "Because no matter what we do or what we look like or what we say, they'll just hear the music and it'll be obvious. The material always comes through." 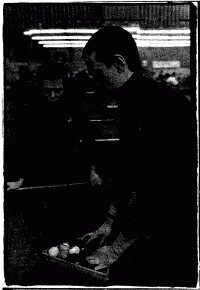 "I think it all comes down to the fact that we live what we do", says Johnny. "It's not a hobby with us. We live rock and roll and we live Crime. We eat, breathe and steep it. And it comes out in the posters and our packaging and our music."

At the risk of being unfashionable, Frankie Fix expresses Crime's economical viewpoint, "You were talking about people posing, and stuff like that. Something else we find is that most bands and most people who go 'we're punks', they're really against any band having any money, or driving a nice car, or having nice clothes and stuff, which to us is real dumb. It's not that we want all the money in the world, it's just that we're really into nice things. People who try to put that down, I think it's phoney...like, in the hippie days everybody didn't want anybody to have any money--you were all supposed to go around in ripped clothes and wear long hair and just live on the street and be a slob. That's real tired. We're modern people."

"Yeah, we're not anti-hippie just to go overboard the other way," injects Hank, "or because we want to spend flashy money. It's just that nice things are better than not nice things. They're stupid if they think other-wise."

Well, now that they have estranged the doctrine-preaching faction of punkdom, does the band which has been called the Bay Area's Number One Problem (mostly by other local bands) have any message it wishes to direct to British rock and roll fans? Of course they do.

"When we come over, can we sleep on somebody's floor?"