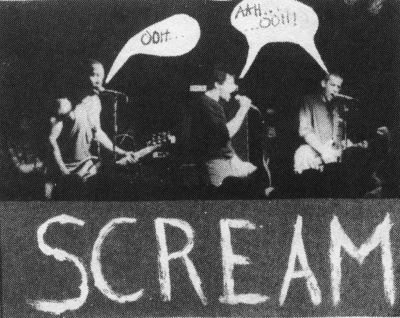 Scream interview from Thrillseeker 2--it was unattributed. Thanks to Steve Kiviat for permission to reprint it!

I wanted to speak with the whole Bailey's Cross Roads' (bXr) gang but for various reasons that was never possible, so I spoke with Skeeter, the bass player. The other members are Peter on vocals, Kent on drums, and Franz on guitar.

TS: So when did you guys get started?
Skeeter: Almost four years ago. We were very underground at first, we only played parties and stuff,and we made some tapes. We first played parties that we arranged; then we started to get asked to play other parties in Virginia, while in DC we couldn't get in; because people didn't know us, they were shy to let us in because they thought we were trying to cash in, but we finally got in.
TS: Do you feel like you're proving something with the album, now to people who were calling you a rock and roll cover band?
Skeeter: Those people just like to classify people, number 1, and ever since then there's been a drastic change. We just kept on pushing, forward is the only progress we have ever taken, we knew eventually people would start listening to us, instead of trying to classify us as punk or rock and roll, which we aren't. We're just music. Most of our music, seriously, is written from melodies we hum in our heads.
TS: Who writes the songs?
Skeeter: All of us together really put in a joint effort. Pete writes the majority of the vocals, and Franz and I write the majority of the songs but Kent wrote the music to "Fight" and helped Greg Miller on the words. Jason Carmen helped us on "Piece of her time." He really wrote it. He wrote the music to it, the first part, and we wrote the other... It's just a funtime song,we never thought we'd do it. But then we decided a year ago that if we did a record, we wanted to make it very versatile, jump in alot of different paths, all the different styles of music that we dig. We still have almost 30 songs that haven't been heard, and we have songs from when we started. Going back, the reason some people called us a rock n roll cover band is because we had a song called "Search and Destroy" which at the time,most of the punks were into "Iggy and the Stooges" and identified it with that, but it was nothing the same. That was just a way we looked at alot of the people who were really slamming. When we used to slam it was for fun, alot of other people were slamming for veangeance.

TS: It seems like some of Pete's lyrics seem more positive, rather than just bitch and complain, they offer hope.
Skeeter: Yea,there's always Hope. We know there's always something up there to reach for. There's two sides to every coin. If someone comes up to you and laughs at you, you can get depressed, or say "what the hell, he's an asshole" and move on.
TS: It must have been really frustrating when you were out in California in the van and then getting all those gigs cancelled?
Skeeter: It was really wrong for our morale. We expected to get some gigs cancelled but not that many. I really got paranoid. We really only played about 2 or 3 times in California, that was at a club and then 2 times at a party. We played at this house-wrecking party in Santa Cruz that was really cool. It was lots of fun. Everyone destroyed the house when we played. We were playing "Helter Skelter" and all these kids were rampaging through the house, just going anywhere they wanted. At another party at this beach house, there were like mostly go-go-people, and we came in there with our attitude, so at first they were going,"punk rock, ooh!" but soon the majority of the people were getting into it, but the owners of the house were negative. But we sat down with them and talked with them and we finally came across.
TS: Did you play in Texas and Arizona?
Skeeter: We played in Arizona at the Backstage with Civil Defense, who I thought were really good. A good thrash band. And some other band called Corporate Risk, who were trash. Some guy who was a hippie and after he saw the other people playing, he cut his hair and became a punk. We're writing a song about it; hopefully musically it's gonna be hardcore accapella. It's gonna be a first.
TS: What do you listen to?
Skeeter: I listen to anything. At first I was into Hendrix, very much into Hendrix. Then I started to get into heavy fusion jazz, like John McLaughlin and The Mahavishnu Orchestra. Then I heard the Teen Idles and liked them, but the band that really crossed me over was, cause I was still shy, doing my own thing,but if I was not the only black person at the show I was one of the few. so that sat in the back of my head and I would pick at it, I always stepped over boundaries by myself, but I didn't know where these people were coming from but it was something I liked. But then when I saw the Bad Brains, I said that's defin-itely where I want to be. Not like the Bad Brains, but they let me relax. I was very intense when I used to go to shows. I would dress punk, but not like everybody else, because us, our group, we've always tried to be individuals. We like the whole scene, but it became like a uniform. It's funny, cause I see Henry in Black Flag and he's finally understanding. When I first started getting in, me and Henry used to be pretty tight, but he didn't like our band cause we didn't dress hardcore enough, like he and Ian. But he knew where we were coming from, everybody's trying to find their own outlet, it's something more positive than just the dress or the "fuck you" attitude.
TS: Jello's always supported you.
Skeeter: Yea, he's great, we've always been on sort of the same frequency. The first time we played in front of the DC people was at HB Woodlawn, and he sang along with DOA on a couple of songs. He was the only person who encouraged us. Because right after that show, I didn't want to play in front of any more DC crowds, because of the way they treated us. If we go out there and we're being serious, I don't mean totally serious politically, I mean about our music, something that moves us, and they treat it like a joke...But now some of the songs on the record are so old! There's really only four new songs.
TS: Are you going to try to tour again? I hear Franz is the only one working now--won 't it be hard?
Skeeter: Franz and Peter are the only ones who are working. I was working on and off during the winter time--I painted houses when I wanted to make money. But we ARE going to California. I would think in July or June, a little bit before we left this time.