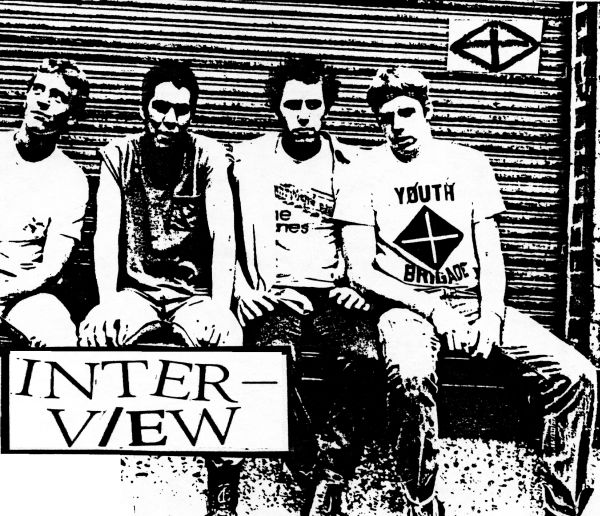 TV: So are you still going to do the gig with Motorhead?
Danny: No they don't want a punk band opening..
TV: Why?
Danny: They already have one heavy metal band opening--the guy who is putting on the show at the Ontario said, "Aw you don't want all these heavy metal kids booing you," and I said, "I don't care" so I said, "Let me talk to Motorhead," and he said, "No that'd make me look bad."
Bert: He's an asshole anyway...
Danny: He's a fuckhead.
TV: How many dates so far have you got for your tour?
Berto: Four definites: Chicago, Madison, and two in LA.
Danny: Ya and there's this really great band called the NECROS who might be getting us a date in Detroit.
Berto: I heard they're queers...
TV: Where are the LA gigs?
Berto: Bards' Apollo and Valley west, which seats 1800 people...
Danny: They won't be seated...
TV: How are you guys set apart from the other DC bands?
Nathan: We're more handsome...
Danny: You look at MINOR THREAT's guest list and it's all guys, and then you look at our guest list and it's all girls--that says it all...
Berto: (sarcastically) We're different--we have our own sound.
TV: Do you get along?
D: Ya Nathan and I have been friends about six years?
Nathan: Ya.
D: Bert and I used to be in a band together called THE UNTOUCHABLES.
D: I quit...
Bert: He got fired, then he quit.
Danny: I quit, then I got fired...
Tesco: I won't talk about the legendary ex bands because I'm sure you're tired of talk about them...
Nathan: No way, TEEN IDLES were a great band...
B&D: Let's take a vote.
TV: What did you think of the article in the Post this morning?
Nathan: I thought it was pretty fair--cept the part about Dischord records being by MacKaye.
TV: So what about the record?
Danny: We're going to record a new demo--we've got the 4 new songs plus the one re-wrote.
Nathan: Dischord #5.
TV: Are you the original 4 members?
D: Original 2 (points at Nathan).
Nathan: The guitarist quit--John Falls.
Danny: We fired the bass player cuz he was gay man--I swear--this guy's named Greg he's such a fairy--he was the guy at the show with the little ruffled blue shirt--he was a real prick.
Nathan: He wore little jump suits and shit.
Bert: He gave em an arty sound.
Danny: He used to say stuff like I GUESS we're OK for a punk band (Laughter). "I mean we don't have to be good cuz if we mess up nobody notices."
TV: So Bert you were just hangin' out after the UNTOUCHABLES?
B: No I was in NO AUTHORITY w/a new drummer with Alec and Eddie--we had some good songs.
D: NOTHING SACRED I thought was pretty good but there was alot of tensions.
Bert: NO AUTHORITY was going nowhere.
Nathan: So then I asked Berto, "Do you wanna play bass for us and he didn't say anything.
Danny: I took him to dinner and the movies was real nice to him so he'd join.
Nathan: The rest is history...
TV: Did the TEEN IDLES break up because that Geordie guy went religious?
Danny: He didn't really go religious--he was just a real flake...
TV: Somebody said he used to throw his guitar at the other band members if he got mad...
Nathan: He and Jeff (drums) got in a hassle one gig.
TV: Can you just write songs or do you need inspiration?
D: We just write them.
Nathan: We look at the headlines.
TV: Do you see this scene as "on an up" so to speak?
Danny: As far as bands go, all these people say "Well this scene is gonna die out," but look at last Thursday (Triple bill benefit--see review) that was great.
Nathan: There were tons of people I'd never seen before like from Maumee, Philadelphia (laughter) and Lansing.
Danny: Lots of people say "Let's go to the 9:30 club, it's supposed to be different..."
TV: Their money's still green...
Danny: Another gallon a gas...
TV: What do you do for recreation?
All: Video games and girls...
Bert: Actually we don't get any girls since Henry moved...
Danny: We got the plug pulled on us at the YMCA gig cuz after one song everyone started fighting but I kept on drumming so they were going to arrest me for inciting a riot....we played two songs at the Adelphi Mill and these rednecks started fights and it ended in a huge brawl out in the parking lot and people got their cars smashed.
Bert: He threw a chair threw someone's windshield.
TV: What's your guitarists name?
ALL: Tom.
TV: Has he played with anyone before?
ALL: Himself!!
TV: Fave Heavy Metal?
Bert: MOTORHEAD.
D: AC/DC.
Nathan: Alice Cooper.
TV: Were you crushed when you got dumped from the bill?
Danny: Very.