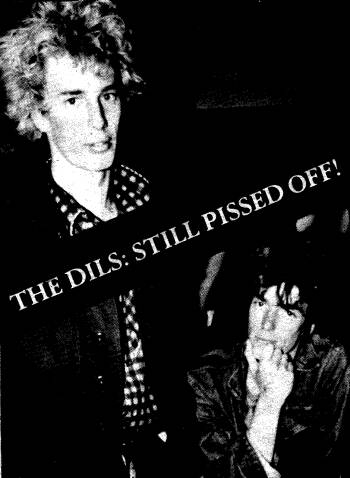 Tony and Chip talked to us a while back, when the Whisky situation was still uncertain and only some bands were unable to play there. For better or worse, everything has become crystal clear now, the Whisky days are a thing of the past, the future is more uncertain than ever but nobody's given up.

SLASH: You guys have a different hair style.
TONY: I dyed my hair dark brown!
SLASH: Have you found the true brethren in San Francisco?
TONY: No. At least I like the weather up there.
SLASH: What about the political weather?
TONY: It's better, but it's still no cigar. But people do think about it up there.
CHIP: We've got an audience that comes to see the Dils, they know what we're singing. No cigar, but maybe a cigarette!
SLASH: It looks like you've built your own audience down here, too, since you left...
TONY (laughing): Yeah, we've been wondering about that. We've done very well on our last two trips down there.
CHIP: We've got a good drummer, we're a better band. Also a little more confident.
SLASH: I saw you were quoted in a Rolling Stone article about that miners' benefit...
CHIP: Any article, even the Slash articles, even this--if it ever comes out--is fun for about five minutes, then you realize how totally worthless they are. They don't mean shit. We've got a foot-high pile of articles, and I still go without food for periods of time, and I still can't pay my bills.
TONY: They're good to wallpaper your bathroom.
SLASH: You're touring quite a lot these days...
TONY: We're going up to the Northwest again in a month. We're traveling a lot. Clubs back East are also calling us, but we can't go and tour, then come back and have no place to live, have to bounce around from house to house in San Francisco.
SLASH: Going to play LA soon?
TONY: Not for a while. I love playing down here, we started here, we couldn't have done it without the people who supported us, but this Whisky nonsense that's going on right now, we've had enough of that bullshit. We've played the Whisky for over a year now and still they can't get their fuckin' story straight. Why won't they let the Dils play this month? Nobody will tell us to our face, everybody we talk to gives us a different story. I'll play a Brendan show if Brendan gets his shit together. Unless we can do it ourselves, which we are working on, I don't think we can play down here. We've had it with the Whisky. Who the fuck needs them? If they're having a ban on some punk bands whose name starts with a "d" and ends with "ls"...
CHIP: That's us and the Dolls! It's kind of funny, the Whisky took over when the Masque closed, and now they're fuckin' your scene over but no one is calling to arms. I would have thought the bands that could still play there would say, "Why are you banning these bands?" Where's the solidarity?
TONY: In San Francisco, when Dirksen started calling bands, saying, "You play the Grove St. place and you won't play here," and since Grove St. isn't a steady thing anyway and whatever bread most bands make is at the Mabuhays, what happened is there was a closing of ranks. The Nuns told Dirk, "If you're going to ban any band, we will never play the Mabuhays again."
CHIP: And it happened overnight. Actually, Dirk even announced it on stage!
TONY: We had told him that if he was going to ban bands that actually needed to play there, needed to build up an audience, then we wouldn't play there either. And if he hasn't got his headliners, he does not make any money.
CHIP: We're not even talking about fans boycotting the Whisky. Fans are fans. I'm talking about the band network.
TONY: Either side could do it. If the bands don't play, the fans won't go, and if the bands want to play, well, the fans could do without their monthly fix of Weirdos music or Screamers music. Then the Whisky would shut down. But there is no solidarity. The bands are saying, "Well, we are playing this weekend. The Dils can't play? That's too bad!" SLASH: Where do you stand now with Dangerhouse?
TONY: Now they want us to take less money than what the original contract said.
SLASH: What was that?
TONY: Fifty per cent of the net.
CHIP: We've been bombarded by all this flakiness bullshit from all sides. I can't really see any reason for signing another contract for less money.
TONY: Our relationship has been rocky since the beginning . From the first time we put out the single they gave us this stuff about "this band is selling more than you, that band has sold so much in this period and you've sold less ..." plus the Black Randy harassment, which we got every time we came down here.
One time that we played the Dangerhouse night he was trying to keep people off our guest list. That's what Joe Strummer was singing about in "Complete Control," and he was talking about CBS doing it! Shit, this is Dangerhouse, people who are our friends. They've always tried to make us feel like shit, then they say why don't you want to be friends with us? So we just told them, "We're working for you right now, we don't have to like it. We're just another band on your roster." I wouldn't like RCA either if we signed with them.
SLASH: So, a year later, no trace of creeping mellowness in sight. The Dils are still angry...
TONY: Punk was going to be new, it was going to change things. Well, it's not. It's just a microcosm of the big scene.
CHIP: Lord of the Flies.

return to the dils