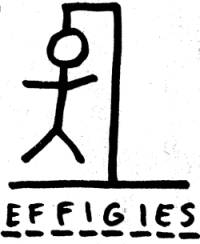 If you have to call something the beginning, it would be a club called La Mere for the Chicago punk scene. That club quickly closed and supposedly the Police set the fire that burned it down. Chicago has always been know for it's political corruption, which is very evident in getting bars open and keeping them open, especially with the Police payoffs. This brings us to the Oz Club, which happened at a couple of locations, and is responsible for spawning the Chicago punk scene of today. Most of the hardcore from the old La Mere days ended up at inner city bars like Oz, but as time went on they were replaced by a new crowd, and new bands like the Subverts, Strike Under and the Effigies.

The Effigies are perhaps the biggest and most popular of these bands now, they have an album out and have just completed their first tour (to the west coast). "We're glad to get the band exposure and see parts of the country that we have. The record didn't seem to be distributed too well, so we were virtual unknowns on this tour." This fact led to the Effigies breaking off with Autumn Records and planning their own release in the near future. As for the tour, well, here in LA they barely got off two gigs--both at Godzillas. Their other gigs: San Diego, Santa Barbera, Riverside and the Cathey de Grande all fell through for various reasons, and the band was left with little money but a lot of experience for their next tour.

We interviewed the band on one particularly dull night. They all seemed to have a lot on their minds and showed that alot of thought was going into what they do. We started off talking about "the legend of Oz" (now closed) and how Chicago has gotten bad relationships with other cities because of the strict carding at most bars and the lack of a place for underage people to go:

John: The Necros and some DC bands came to Chicago with alot of their underage friends. They were told they couldn't get in and when they couldn't they got pissed off. Hand stamp or not, if you don't have a great ID you are not getting in. Alot of attention has been given to the DC scene and so they came into town like primadonnas just about, but they were unknowns, even though the records do pretty good.

There's this record store, Wax Trax in Chicago that has a sort of condescending attitude towards punks and they won't stock their shelves, and that's the only place to get records in Chicago. They just hype the NME top 10...

The Dead Kennedy's played in Chicago and drew over 1000 people both shows. You need bands like that, they brought attention to us even though we're a local band, people went to see the Dead Kennedy's and saw us opening. People come out for those big british bands but they just don't support the local bands...

With punk the name Effigies was sort of the way it was with the fashion and shit to begin with, at least that's how I like to think it was when we started out. Now it's almost become a parody of itself, with fashion nonsense.

Oil: Spikes and shit is like bullshit to us.

Steve: We think of ourselves as a hardcore band but not as a thrash band. We've got some fast songs but we've got some slow songs too. Some of our songs have a disco rhythm behind them. Thrash music is good but there's so many thrash bands these days that it becomes repetitious and boring.

Oil: We don't want to sound like the next band that plays or every other band across the country.

Steve: Lyrically--I don't know how many people listen to the lyrics anymore. There's alot of assholes out there that just want to fight.

Oil: Lyrics in punk are 50 % of the whole thing. If you're a real punk band then you have something to say. If you don't, give me a break, you might as well join the heavy metal scene. I just want to vomit when I hear that kind of stuff! John writes all our lyrics and as far as I'm concerned they have alot to say.

Steve: We all come up with ideas and John just puts them to lyrics.

Oil: So many bands want to say fuck law, fuck this--they have something to say but it's not anything to say. My little sister, if she had a profanity mouth, she could spout off and somebody could write it down and say, "Hey we have a new song here!"

John: You gotta tell people to think for themselves, maybe get them to wonder why nazi punks are assholes instead of just telling them. Scenes need leaders and shit, but Jello comes out with this big "Nazi Punks Fuck Off," but how many people are gonna listen to that and just follow what he says--they won't believe what he says, it's just the thing to do because Biafra says it. Bands should try to organize and change things, get right down in the muck and stick their foot in the door and say, "Why don't you guys take a look at yourselves and tell me what you see?"
Imitation is like a sincere form of flattery but all these thrash bands are just trivializing everything Black Flag is trying to do. If you really want change the best thing you can do is put yourself up as an example and say "Look, this is what I'm doing, if you want to do it fine, but at least look at it." I'm not fucking trying to knock anybody over the head, but we're here!

Oil: Yeah.....when we played with Anti-Pasti people said, "Hey, you went over I good why don't you move out to LA?" and that's all well and good but there are already a million bands out here and we want to put Chicago on the map. So when this tour's over, we're going back to Chicago, back to our jobs--we all work,we're a working class band.

John: In Chicago we were asked to do this benefit for a place called O'Banions, (hang out spot that sort of replaced Oz)which we refused to do...

Oil: First of all, their whole attitude toward punk is fucked. They keep that club open just to make money and they don't give a shit about the music or the bands. It's not worth keeping open. They came to us and said, "Hey come play our benefit," and we said, "No way." We're not that kind of a band. They're not gonna make a ton of money off of us for a club that doesn't give a shit about the music and just wants to make money off of you. So people said we were big headed and shit but they didn't know the whole story.

John: The thing that killed me was like in '78 these people were handing out flyers about how punk was a fascist cult, and these are the same people now who wanted to play the benefit. The same people you never see at the club. I said, "Look, if you want to support the club come out and spend your fucking money." These bands, Direct Drive and shit like that, were the critics saying the Effigies are assholes for not playing--well we don't have to answer to those assholes and we never will. Like we have Rock Against Racism gigs and that whole movement strikes me as being corrupt, like all the money filters into all these places.

John: Yeah, Like at the first RAR gig at Lincoln Park they were calling US Nazi types!

We talked about lots more in this interview like about how the radio sucks in Chicago "It amazes me how people complain about KROQ and KNAC--Black Flag at 10 in the morning--what more do you want?" is their comparison to LA. About Blues in Chicago. About the abundance of preppie types, and about music in general.

One last thing we have to add is something on the Effigies manager, John Bonham. We could easily do an entire interview with him alone, and maybe we will, but until then we'll just say that he has most of the same feelings as the Effigies. More impressive is his list of accomplishments in support of punk music in America. He has managed and toured with the Subverts, the Fix, Toxic Reasons and is permanent now with me Effigies. He also used to put out a very anarchistic fanzine called "Your Country Needs You". If more people had John's enthusiasm we would really have a great national scene. 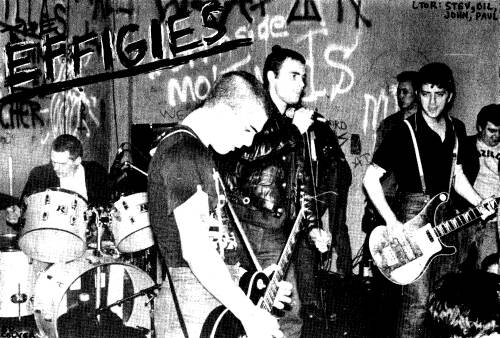