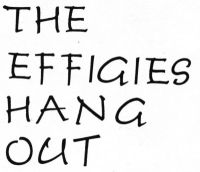 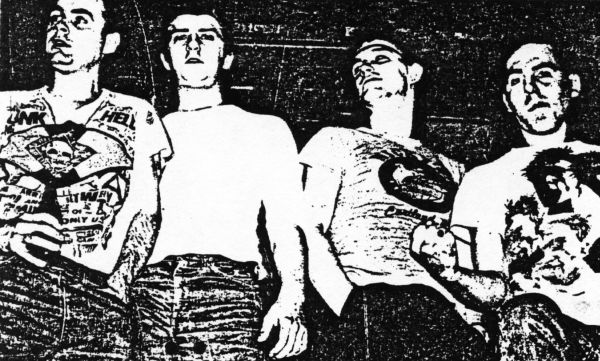 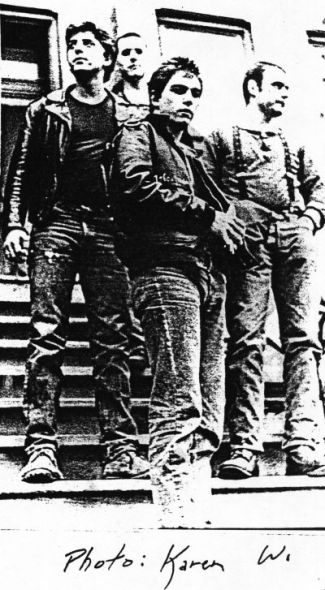 CR: What are you doing to differentiate yourselves from all the other hardcore bands?
Paul: By not playing as fast.
Errol: We like to write our songs so they don't all sound like every other song that we do. We like to break our set up. Other bands will play one song after another and they all sound alike. We like all of our songs to have a different feel to them.
John: It's especially important on the live set, cause every song has its own personality. Maybe it's a bit more melodic. Anyway we have a change of pace, therefore every song stands out a bit more.
Errol: Yeah, our songs have dynamics.
Steve: Also not everyone of our songs are about Reagan, or nuclear destruction. I know its important to think about these things; but...
Paul: All these bands only play super fast.
CR: What did you find about the West Coast on your last tour that you liked, or disliked.
Steve: It's a really big scene out there. But one thing I didn't like was that too many of the bands were just too much alike.
Paul: Alot of these bands are overhyped: China White and Christian Death.
John: LA and SF are worlds apart. And that's something you can't appreciate until you get out there. San Franscisco is really conservative, while LA is maniacsville. SF almost gives you a European feel.
Paul: I was really impressed with the reaction we got out there, but alot of people are really into it for the wrong reasons. Like just beeause their parents broke up, they get hurt and decide to become destructive punks.
CR: Is your record company going to be an ongoing concern?
John: Yeah, as far as it is concerned it is a lot of work, and we still aren't getting the distribution we want. But we wanted to do it ourselves. The whole point of the record company is not to make money. It's just that we want to make sure that everything gets done right. We are distributing this to the right outlets, not just throwing the record to any old outlet.
Errol: The reason we are doing it ourselves is that we feel we are the best people to be handling our business.
John: Now Trial By Fire, are putting a record out on our label, but its going to be more like a co-operative effort. Because Bob has a lot of experience, so he will be able to get that album out. But any band that wants to be on the label will have to work on it.
CR: Do you want to say anything about your Wax Trax incident?
John: I'll say one thing, I'm sorry for saying it. But it happened at a low point on our tour. We just had three gigs cancelled cause of riots, clubs closing. So we just tended to explode.
Errol: Out in the West Coast alot of people stay away because of the riots. They want to see a show not get hurt in the process.
Steve: The big thing right now is the chicken fights. They hoist a guy up on their shoulders and fight on the dance floor.
CR: It seems the band the Effigies have gotten more confident in the past year.
John: Yeah, that's what happens when you are able to pull through all the shit everyone give you for a full year.
CR: What do you want to follow up the Body Bag single up with?
Paul: Hopefully an album.
John: Either a single or an album. We have enough material to do both. But, right now we're broke because the tour was a financial disaster. But the way we gigged it was almost as if we wanted to lose money. We were staying in people's houses and not spending alot of money. But we were stranded too long in certain spots. You have got to be quick when your on the road. Or else you just lose your money.
Steve: The best advice I could give to a group is to do it fast. Keep it short. Two and a half weeks, or three at the tops. Hit your major cities and get back. 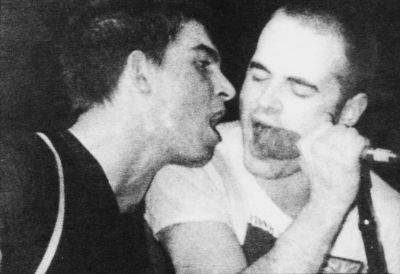 John: Don't go to podunk towns, like Lawrence, Kansas. There we got this shitty review in a fanzine just because we don't have a saxophone or a synthesizer. OK, but there are other points to the music. We're doing something different, you just have to look a bit harder. Things are going to be changed by real differences. Not adding or subtracting instruments. Banging on a tin can is different, granted, but that's pretty inaccessible to most people. So that has got a limited value. Some noise is good, but it has to be well done.
CR: Do you want to go beyond the Hardcore audience?
Paul: Yeah, well if we just play the hardcore circuit we would just be spinning our wheels. We aren't going to change our music to expand the audience, but we don't want to limit the people we can get exposed to.
John: Yeah, some of the hardcore kids are extremely narrow minded. "Black Flag rules" and nothing else.
Steve: I think the Effigies play a broader base of music than most of the bands we are billed with. Most bands just thrash it out on stage.
John: That's what a band is though...it's a collection of the way you look, the way you move on stage, your singles, your live shows...
CR: What is the furthest east you guys have played?
Paul: Detroit.
CR: You were then surprised by the NY Rocker Poll?
Steve: Yeah.
Paul: Considering that Steve and John spent all night filling out ballots.
John: That really killed me when they accused us of ballot stuffing. I mean I don't even know anybody who reads that magazine anymore.
Paul: I just wonder how many votes we had to get to qualify for a listing. I'd guess not very many.
CR: What groups do you like now?
Paul: I was really impressed by the Banshees.
John: When we were out on the West Coast we really made an effort to see all the bands, but after a while you start to make an effort to avoid them.
Paul: Yeah, by the end of the tour it all started to blur. From the Fartz to Circle One it was all one "brzzzzz, ba, ba, ba, yeah yeah fuck you, Ronald Reagan, brzzzzz".
Steve: The Subs show was really great.
CR: What are you going to do differently on the next tour?
John: The next time we play we are going to the East Coast and just hit the big cities. But we are hoping our record does real well out there, so that were are somewhat recognized. Out on the west coast no one had even heard of us.
Paul: We figure we will go out in the fall, cause it would be unbearable to go in June or July.
John: They pay real well in new york; but its real hard to get the gigs in the first place.
CR: How do you think you will do in England?
Steve: Nick Garrett said we'd do well there, except that we wouldn't meet their expectations of what a "punk" should look like. Out there the look has alot to do with it. Black Flag said the kids over there didn't like them cause they didn't have green or purple hair.
CR: Do you think of yourselves as the Effigies from Chicago?
Paul: Oh yeah, sure.
John: We are going to make our name from Chicago, and the fact that we are from Chicago. We may not make it here though.
Paul: People out in LA like the fact that we are from Chicago.
John: Yeah, they kept on telling us, "move out here, move out here". What the hell, do we want to move out there for. 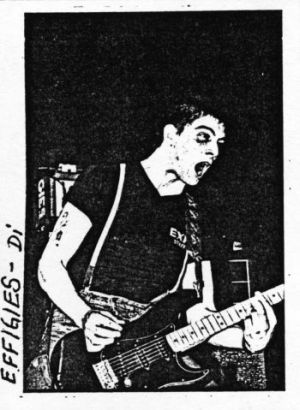 CR: What about the violence in LA?
John: They kids are all about sixteen and seventeen, and all they do is fight...and the girls really go at it. They are incredibly territorial, I mean you've got to leave on the right side of the street or they will be picking a good fight with you. The thing about it is either you get beat up inside or the cops are waiting for you outside.
Paul: The thing is, Chicago cops if you leave them alone and stay out of their way they won't bother you. But out in LA its a big macho thing to be a LAPD. They got thier blonde locks and their fascist attitude.
Steve: That's why I liked playing in SF better. Out there they are just as enthusiastic as LA, but they are there to have a good time not just to break some skulls.
John: I hate the big macho thing...struggling to keep up front.
Steve: They also have these punk families; where these older guys bring their little kids with shaven head, it not really funny when you actually see it.
CR: What songs are going on the first album?
Steve: Well, we will do a couple of older ones, but mainly we will be putting new stuff on it.
John: People don't even know what the whole set is about. They just know Body Bag...
Paul: We are so sick of Body Bag.
John: Our newer stuff is different. It has the same energy, it just doesn't have to be at 99 MPH.
Paul: It takes more to write a good songe, then just playing real fast.
Steve: But before the new stuff comes out we want to get the single released in England.
John: We are going to England by the end of the Year, whether we get the record released or not. We are saving up our money right now. Plus once you release a record over there, everyone back here will take notice, "hey look, the Effigies they really are good!"
Steve: Plus it will give us some respect.
Paul: Yeah, cause over here we get offers of $25 to play with the Upstarts, thanks alot.
Steve: The whole reason we are playing is cause we enjoy it, we're not making alot of money. It's the best thing I'm doing right now.
Paul: The tour was no money maker, it was more like a vacation.
John: Yeah, but unfortunately it was a real miserable vacation.
CR: How do you like the way people relate to you now?
John: It's funny, people think we are real political extremists "Hey, Mob Clash is great--you guys must be Trokskyites." So from now on we are going to include lyric sheets in our singles. Because we do have a responsiblity to explain ourselves, but they've got a responsibilty to listen. 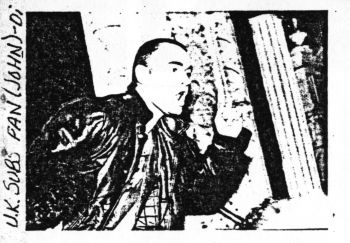