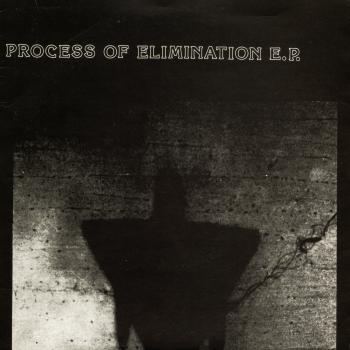 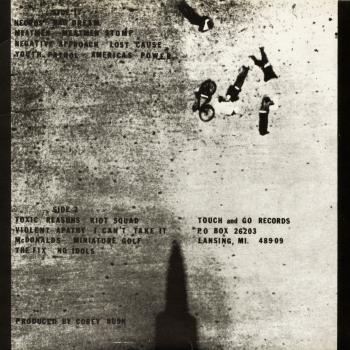 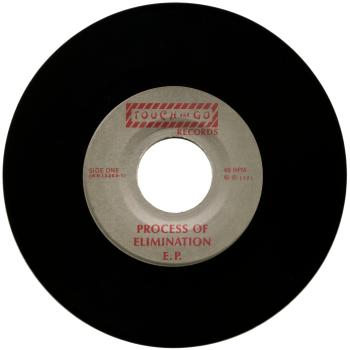 Recording notes: No Idols was recorded on October 10 or 11, at "some hippie's" home studio. All the Detroit bands recorded their songs there, and got to do two takes each--I don't know what happened to the alternate verions, or even if they were saved. Barry Henssler sings along on No Idols.

Notes: Two inserts, one of photos one of lyrics. Unfortunately no Fix photos were available. Later versions had three inserts (the third being a t-shirt ad). Later presses also had notes as to which bands had broken up and which were still active.

The original Process of Elimination artwork was by Jeff Nelson (Minor Threat/Dischord Records), but got lost in the mail. Early ads for the Process EP featured a completely different mock-up of the cover, presumably based on Jeff's art.

Lyrics are available, as are scans of the picture and lyric inserts. I have two ads for the Process EP, both with the alternate mock-up art. The first is from Touch and Go 16, the second from number 17.

Necros alternately try to the scariest and fastest of all and succeed / Violent Apathy win shit production recognition, with most of the other runners-up / what's wrong with saving your gig moneyfor time in a decent studio with someone behind the board who halfway knows what he's doing? / guess then it wouldn't be a team effort / best thing here (besides Toxic Reasons) is that it shows Michigan and Ohio can forget their football rivalry and cooperate in some way / speaking of TR, I can't believe they sent a copy of their "Ghost Town" EP to Mama's but nothing to me / you guys really think it'll get played up here? (do you really think it'll get a good review in here? --Ed.) / well, they'd get a bit of mail out of it regardless / let's see, named three bands so far / the other five are Meatmen (I didn't know you had your own band, Tescie!) -- too much stupid talk, not enough punch / also Negative Approach, the Fix, and Youth Patrol (good Richard Simmons exercise music, c'mon, you know the words -- what are they?) and McDonald's (I'm going to take all joke bands like this out back and shoot 'em)
--the Offense 15

Now hardcore ain't my bowl of cereal, but if it was, this is a regular Assortment Pak that will surely give you a sugar-smack upside your head. The local HC mob already own this, no doubt, so no need preching to the converted. Otherwise it's at least an adequate documentation of the burgeoning local HC action and an introduction to a scene that's been nurtured into existence by Touch and Go and the Necros. This record's no production masterpiece, the honors done by the Necros' Coery Rusk, but heck, eight bands here make a lot of noise regardless. Too bad the Meatmen's "Meatmen Stomp" isn't as totally berserk as the first time I heard it at Nunzio's Last-Nail-In-The-Coffin show. Negative Approach, whom I hated at that same show, have a maniacally violent vocal on "Lost Cause" which is my pick o' this litter. Youth Patrol come up a close second with a better-produced "America's Power" with a Sham 69-like football chant b/g vocals. The Fix's cut is too thin and Violent Apathy drown in their own muddy mix. Heck, there's even a hardcore joke band, McDonald's, that does their epic "Miniature Golf" in about 11 seconds. The lyrics allegedly by Brian Hyland, are printed on the insert sheet and they aren't the ones sung, but they perfectly capsulize 30 years of pop music and what it's all about.
--Trashland Adventures 4