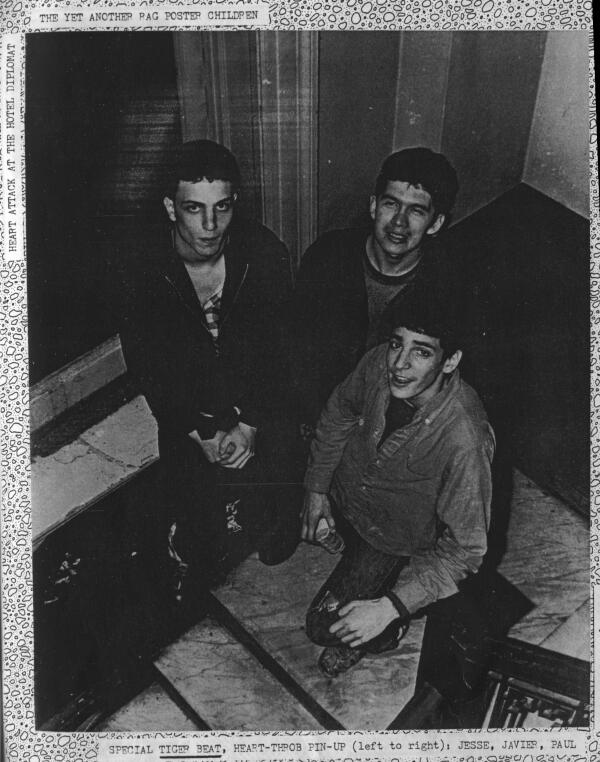 An interview with Jesse Malin of HEART ATTACK. This interview took place on the phone in early August. HEART ATTACK takes a vacation for a while auditions for a new guitarist continue:

WHY NO NEW SONGS ON THE NY THRASH TAPE?

Because they gave us a deadline and no money to record. I hate the tape and I think it's a poor compilation to represent New York hardcore. Most of the songs are so old. We hate the fact that our old songs are on it. We didn't like the "God Is Dead" EP when we released it. If they put songs by the Mad on it, why didn't they put the Stims on it?

I FEEL THE SAME WAY, BUT I DO LOVE THE TAPE ANYWAY. MOST OF THE SONGS WERE PLAYED ON THE NOISE SHOW, CARE OF TIM SOMMERS.

Tim exploited NY hardcore and punk on THRASH. It's not what New York is doing now.

DID YOU MAKE ANY MONEY FROM IT?

Yeah, but not enough to record.

HOW MANY "GOD IS DEAD" EPS DID YOU PRINT?

300 copies. People ask us to re-release it, but we say 'no way.' We know it could sell, but doing that would represent us as making money on something we don't even like.

HOW LONG DID IT TAKE TO SELL OUT?

I SEE HEART ATTACK TEE SHIRTS AROUND, DID YOU MAKE THEM?

No, a guy from Jersey makes them. Tony. He also made The Mob and Misguided.

DO YOU LIKE OUR RADIO, 'PIRATE' AND 'LIFE AFTER DEATH'?

It's good to have cool music on the radio. They're good shows, better than having no hardcore programs at all.

Tim had a very personal show. He played what he wanted to play, not what the majority of listeners liked. NOISE had no dedication.

I don't think it's a scene. There's no unity whatsoever. Too many people and too many different attitudes. There's a lot of stupidity and a lot of 'coolness'.

WHAT ABOUT THE SLAMMERS AND SKINS?

They have an outlet to hurt people, to dance and show their emotions. The dance is so routine...

REMEMBER THAT LAST NIGHT AT THE PEP? YOU SAID YOU WERE SURPRISED THAT THE GIRLS WERE EVEN DANCING, THAT IT WASN'T LIKE A FOOTBALL GAME. THAT WAS GREAT.

WHAT'S THE REASON FOR A NEW GUITARIST?

It's a change, to be more intense. It's for performing for the show. I can concentrate on the vocals more.

DO YOU HAVE PLANS ON PICKING UP THE GUITAR AGAIN?

For a couple of songs. We have ideas.

YOU'RE A GREAT GUITARIST AND HEART ATTACK IS GREAT. WE'RE CONFUSED, WE THINK YOU SHOULD STAY A TRIO.

It'll be a change for the better. We're trying something different. Don't knock it before we try it.

HOW'S IT GONNA BE JUST HANDLING THE VOCALS?

I feel good, positive. For the show.

WHAT'S UP WITH THE NEW SINGLE?

It's recorded, but we have some doubts. It's a change.

WILL IT BE HEART ATTACK AS A TRIO?

WILL IT BE ON DAMAGED GOODS RECORDS?

No, Rat Cage Records. Paid for in England.

HOW MANY SONGS ON THE NEW ONE?

WHEN WILL IT BE RELEASED?

I like alot of them, but alot are stupid. At least they're trying.

FAVORITE OUT OF TOWN BAND?

Minor Threat. I used to like the DKs alot, but they disappointed me this tour. The Circle Jerks are great. Great drummer.

No, not as The Possessed.

HOW OLD IS EVERYBODY IN THE BAND?

BESIDES GOING TO SCHOOL, DO YOU GUYS WORK OR FUCK OFF?

We all work. I work at a gas station, Paul works at Baskin Robbins and Javier works at Tropicana.

Pretty good. A lot of auditions, but we still have people in mind. We only tried out six.

SEND US A DEMO TAPE FOR REVIEW, OK?

Sure, send me a Savage Circle demo also.v

Sure. 'Family Life', 'From What I See', 'Our Approach', 'Waiting for WWIII', 'Brainwashed Children', 'Trendies', 'Morality', 'Society', 'English Cunts'. (As he's saying the names I hear him playing Heart Attack songs on his guitar.)