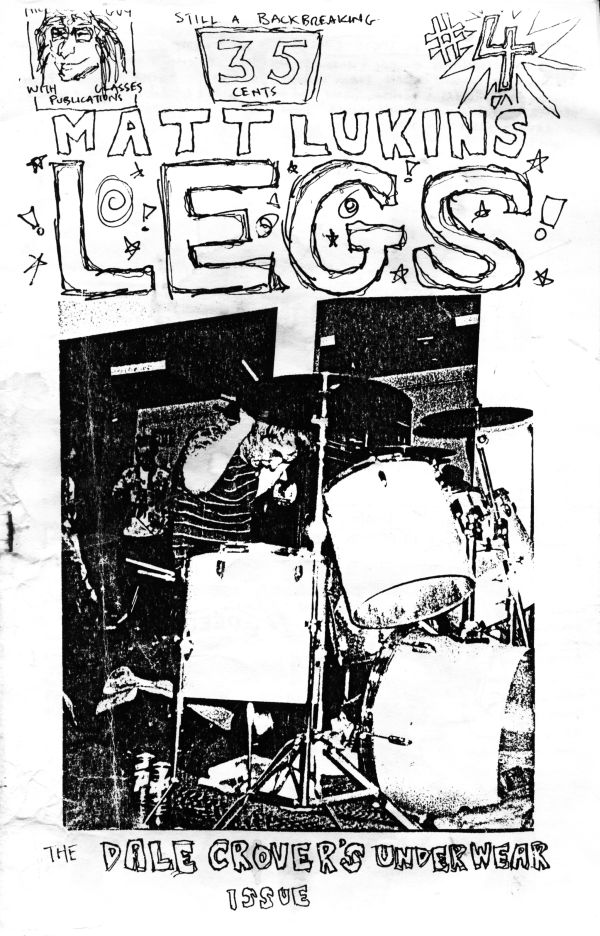 Matt Lukin's Legs was a fanzine done by Joe Preston in the late 1980's. Preston was a huge Melvins fan, and would later join the band (briefly) in the early 90's. 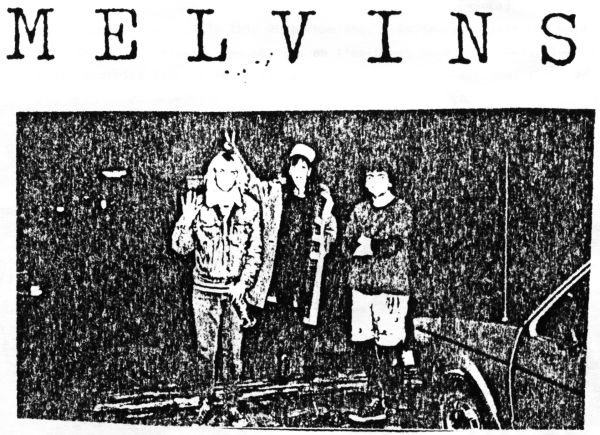 MLL: I don't know what to ask.
Buzz: Go ahead, go nuts.
Dale: Don't ask us about cereal.
MLL: OK.
D: We don't eat breakfast.
MLL: No? Why not?
B: We don't get up early enough.
D: Not until 1:00.
MLL: Well, that's no excuse.
B: We're up too early actually.
Lori: We like to have breakfast at dinner, actually I had breakfast quite early this morning. 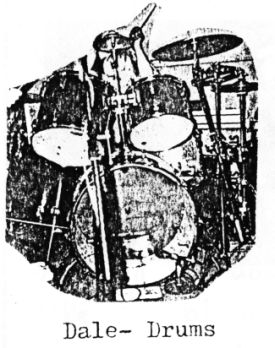 D: Yeah, I had breakfast at like one or two this morning.
L: I eat all the same cereals as Matt Lukin. I like Lucky Charms...
B: That's a good cereal.
D: I don't like those, except for maybe Wheaties.
B: I like all that sugar coated kid stuff, that's what I like. That's what they say, I eat like a three year old. You know, chocolate milk and pop tarts.
MLL: Have you had that blueberry milk?
B: No, uh uh, Just strawberry.
MLL: It's like kefir, it's really thick.
L: Oh, that stuff is great, I think they have Peach too. (I think that's what he said)
D: I drink a quart of chocolate milk a day, usually.
B: I'm into that strawberry stuff.
D: You can't find that around here very well.
MLL: Usually just at 7-11s, but not all of them.
D: I tried this vanilla milk too, that stuff's just totally thick. It's like a milkshake.
MLL: Any bands that you're into right now?
(pause)
D: Kiss and Black Sabbath.
MLL: Well yeah...How come you didn't do any covers tonight?
B: We don't know any.
D: We're into the Pink Faeries.
B: (to Lori) What bands do you like?
D: She doesn't like bands. She likes rubber bands. 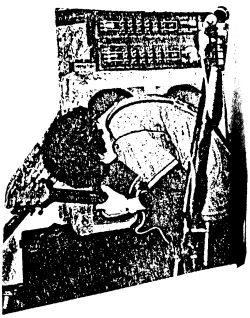 L: I like the chanting monks.
MLL: Like the Ramayana monkey chant?
L: That's pretty wild stuff, but this is different, it's the Tibetan monks.
D: The Gyuto Monks.
L: Tantric choir
B: We actually saw them live here. They were great. It sent shivers up my spine, way more than any rock band has ever done.
D: Nobody knows how they do it--
B: Oh yeah, they know how it's done.
B: They know how, but Americans just can't do it.
D: Well no one knows, well musically--
B: I don't know...
D: One human voice isn't supposed to be able to make three tones at once, but somehow this one guy could make three tones...
B: It was wild. It sold out and it was great. A once in a lifetime thing probably.
MLL: My brother told me about something like that, he saw this women's choir from Yugoslavia, he said they were really incredible and did some weird stuff.
B: Well, that's the thing, what these guys are don't isn't song, it's prayer.
L: It's not like a regular choir, it's this deep chanting, nothing much like songs.
B: I've never heard anything like it in my life.
L: Let's move on, next question please.
MLL: How do you feel about moving here? 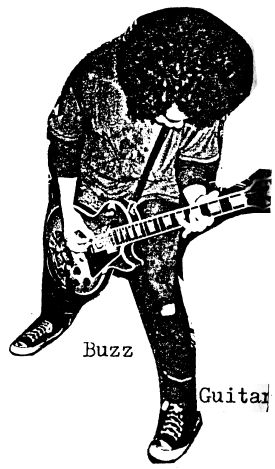 B: I think it's great.
MLL: I wouldn't live here if I had to drive around.
B: I don't think it's any worse than Seattle. I mean what's the difference between here and there?
MLL: I don't know, I've never driven there.
B: I mean any big city. They're all the same.
MLL: Not really.
L: It's not as bad some other large cities, especially not as bad as LA.
(Amen to that.)
D: There's just a lot more here for us than Aberdeen, I mean we can play out now.
L: It's better environment.
B: It's better for me, where I was living was literally taking years off my life, that's no lie. It's just ridiculous for me to stay there, I mean why? I had a chance to move out of that place, and why not?
D: San Francisco's got nicer weather, better shows, we like ourselves better...
B: Culturally, I mean if I hadn't lived here I wouldn't have seen the Tantric Monks, so there. There's a reason.
D: Well, there's lots of other stuff besides that.
B: We saw Iggy two times this year already.
MLL: My friend Kasey saw him in Barcelona Spain recently, said he was great.
D: The new stuff, we like Iggy Pop's new stuff. That's the only stuff I can think of that's new that we like.
B: So, do you think we'd go over well in Eugene?
MLL: Oh yeah, I don't know. See, that's the thing. My friend Greg saw you down here around Christmas, and he said he didn't really understand what I saw in you, (LAUGHTER) which was really disappointing.
B: We had some girl come up to us and say "You guys suck without Matt in the band."
L: She said that before we even played.
D: She'd never seen us, but she was saying "I like all the Sub Pop bands, they're so great, so cute."
B: Then she named off all these other bands that I hate that she liked, so that kind of made it funny. Her opinion didn't faze me too much.
MLL: Uh, uh...
B: How's your magazine doing? 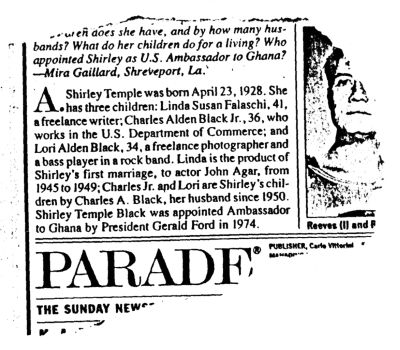 MLL: It's doing pretty well I guess.
D: Selling lots of copies?
MLL: Nope.
D: Giving away lots of copies?
MLL: Yup. That's my big marketing strategy.
B: Just like the Rocket in Seattle.
MLL: Yeah, well I print up around a hundred, and give them all away pretty much.
D: You need a typewriter?
MLL: I have one, just no ink cartridge.
D: Some of it's written out kind of...
MLL: Did it get kind of hard to read?
D: Yeah, well...
MLL: I got this really skinny pen and it didn't photocopy too well.
B: You should use one of those big thick magic markers.
D: I want to see more of those great photos.
MLL: Well, I took a bunch tonight.
D: You did?
MLL: Yeah, didn't you notice? I was right in front of you.
B: Oh, well, I had my eyes closed.
MLL: Actually that's lucky. Actually, I've got a bunch of good pictures from Tobi Vail.
B: Who's that?
MLL: She's in Go Team and she used to be in Doris. She plays drums wicked. 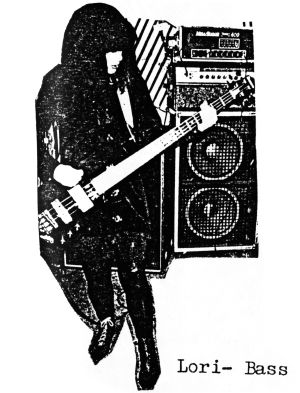 B: I've never heard of either of those bands.
D: I think I've heard of the Go Team from reading some K newsletter.
MLL: Yeah, it's Calvin's main musical project these days.
B: I like Calvin, he's always been real nice to me.
D: I like Calvin...and Hobbes.
(mild chuckles)
B: I think he's real cool, I think he deserves what he's getting.
MLL: And what's that?
B: I mean he gets to work on his band and his label and he doesn't need a real job. He's worked real hard on that, I'm proud of him. That's what I'm trying to say. He's doing exactly what he wants and it's paying off. Nobody else is putting stuff like that out, no way man. I really respect him.
L: I'm sleepy.
D: Hi Sleepy.
MLL: Glad to meet you, I'm Dopey.
(polite ha-ha)
B: Anything else? Oh yeah, Dale's parents are coming early in the morning. 6:00.
MLL: I guess that's why we're not going to your house right now.
L: That's right, because Mom and Dad will be home bright and early.
MLL: Oh no, the tape's almost over. Last comments quick!
D: Buy our new record, it might be out this summer.
MLL: Oh geez, that's stuff I should have asked you abou--
(end of tape) 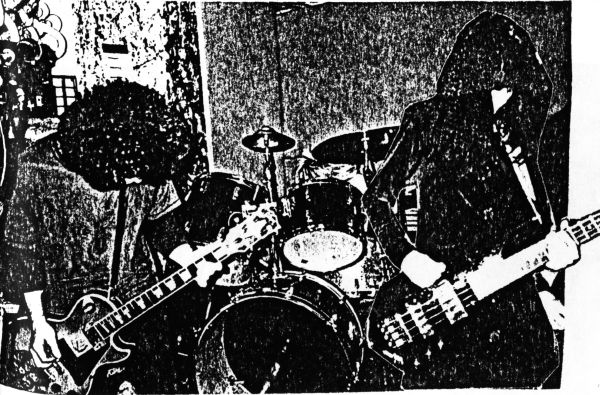