Inspired by the Germs and Black Flag; the desire to expend pent-up energy was excuse enough to start their own band. Solger was a short-lived outfit, only performing a small handful of shows. If not for their EP they would be lost in total obscurity, save only for those in Seattle who saw them. Ironically enough, their EP is doing well in San Francisco. Too bad though, it's now been a year since their break-up. Hopefully, bands in Seattle will get more attention because of bands like Solger. Who knows, maybe the whole music industry will wake up. Wishful thinking, huh?

Cat: How many songs did you have in your repertoire?

Doug: About nine or ten.

Cat: Was that the extent of your show, or did you throw in some covers?

Doug: Yeah, we did covers.

Kyle: What We Do Is Secret; Germs' song. We did a Damned cover; Stab Your Back, but we changed it to Suck Your Cock or Suck My Cock.

Cat: More black humor. What impressed you about the Germs or Black Flag?

Doug: My opinion is that bands like Black Flag, Germs are punk bands. They are hardcore, not teeny-bopper bands. A lot of bands come on and they think they're going to be hardcore, but they're teeny-bopper music. It's like 1-2-3-4-5-6....you know. Let's have lots of fun.

Kyle: Black Flag has lots of energy. That was their big thing.

Cat: What's your real definition of hardcore, then?

Doug: Loud, fast power that's annoying, but in the right perspective. A lot of music is annoying and you don't want to hear it cause it's a bunch of shit. You can take the band seriously. They don't get up there and dance around and shit.

Kyle: It's a real adrenaline rush.

Doug: It's not repetitious.

Cat: You guys had a pretty good following?

Doug: No. Too man trendy people in Seattle. We felt better doing shows out of town. I don't know—I didn't give a shit.

Cat: Do you think it was basically the amount of ignorance? 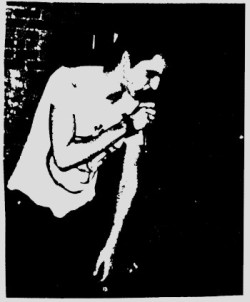 Doug: I don't know. I thought Solger was a good band. I watched bands in Seattle for years and years, and I thought the band Solger had energy and were taken more seriously than any other bands.

Kyle: When we were playing there weren't the people there are now. There are a lot more people in the scene now.

Doug: Like the trendies, they wouldn't admit they liked it.

Cat: Would you guys say you basically made a start of things around here, and then everybody jumped on the bandwagon?

Kyle: The way I look at it, even though I don't want to put this in there—

Kyle: Oh, I don't care. All these other bands are U-District stupid, wanna-be-poppy, hopefully-make-it-like-the-Undertones—

Kyle: Yeah. I think out attitude was more of a—you know, like I was really into the LA scene, and that's more of what I wanted. There weren't the bands like that around. Just go out and attack. Before that it was all Psycho-pop and Zipdad kind of music.

Cat: Were you trying to attract a certain crowd or were you out doing it for yourself?

Doug: That's the way we got our kicks. I didn't have nothing to do and I wanted to play in a band we got together. None of us even really knew each other. 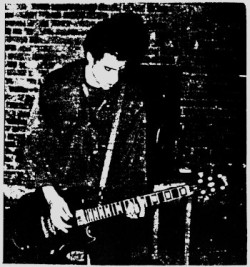 Cat: It's just the fact that anybody can do it if they try hard enough?

Kyle: Well, not everybody can do it, 'cause not everyone wants to do it. But if you want to do it, you can do it.

Cat: How did you guys meet?

Kyle: OK, first of all I met Paul. I saw his ad in the paper. He wanted to start a new wave-punk band basically. I wanted to get in a band 'cause I saw Black Flag at the Bahamas. I got a kick out of that and thought this was what I wanted to do. So I called him up, and I asked him if he'd heard of the Germs and all that, and he had. So, we got together at a store, and I got a practice space at the Showbox. Then we put up a poster on the wall and I guess Doug saw that. Tor came in by asking if he could practice. At first we said no, and then we took him.

Doug: Tor is a good drummer. I just wanted to say that. I thought he added a nice touch.

Kyle: He didn't have the power we could have used. Those are the breaks—he was an artist.

Cat: Would you say he added a pop influence—the artistic touch?

Doug: He was rather an artist within himself. In that sense he added a nice touch to the band 'cause he didn't play a typical beat. You can hear it on the record—boom!

Cat: Did you accomplish anything?

Doug: Yeah. I learned a lot about playing on stage. I think everyone should be in a band that does a lot of politics and stuff, but it's like, you know, flogging a dead horse. You gotta make your point, maybe, but you can't do it all your life.

Kyle: If you've said it once, what's the point of playing 400 shows if it's going to be the same thing? You've done it.

Cat: So basically it was personal accomplishments that you succeeded in?

Kyle: Everyone but Paul. Paul wants to become more famous.

Doug: That's why the band broke up—this is my opinion. Paul may give the typical rock star story that he got bored, but the real reason was he met Upchuck.

Cat: Was there a special idea behind the EP?

Doug: Just that we existed.

Doug: We didn't follow the typical band rule. We didn't go to the studio. We just had Phillipo Scrooge do four-track recording. We did guitars in the Showbox dressing room, vocals at the Gas Chamber in the washer and dryer room, and we had it recorded at the Lawrence Gospel Recording Studio. No one can say we made any profit off of it. No one kissed our ass—we kissed no one's ass.

back to the article