It's hardly surprising some people took issue with the song Raping Dead Nuns, especially since the lyrics were a cackling glorification of said act. The exchange below is reprinted from one of the best zines of the era: Wilum Pugmire's Punk Lust.

Wilum's initial comment was part of a longer exchange on feminism, which was interesting, but not really relevent. 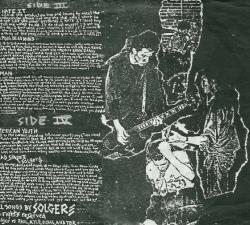 Returning to feminism, one womun askt me how cou'd I possibly consider myself anything of a feminist when I rav'd about Raping Dead Nuns in Lust 3. First of all, ye will notice that I didn't have the guts to give that song's title in the review. Many of my friends are lesbians, & I knew that if they read me praising a song about raping dead nuns, they wou'd be quite annoy'd with me. My argument to this womun was that I cou'd enjoy a song call'd Raping Dead Nuns for the same reason I cou'd enjoy a song called Eating Sever'd Cocks—cos they have as topics items whut shock & disgust, & at the time I thought that was whut punk was all about. "Don't care for nuthin'; ain't nuthin' sacred to a punk; everyone can piss off and die." Now I see the folly in trying to say "this is whut punk is all about," when it is many things for many of us. Another pal reminded me that my attitude was closer to that of a heavy metalist than of a punk.

& so, although I think Solger was a great band, I will admit that the lyrics of that one song ("Sally was a nun, Sally was no fun, so I took a gun and shot her in the head") are very bad and I wish they had never been writ, cos the music to that song is so cool.

The Solger 45
reviewed by Kitti

When I first heard this 45, I nearly puked—I couldn't believe I had been suckered out of $1.99 worth of noisy shit. The sound quality was...well...punk; the music unrefined, the lyrics unintelligible. I tucked it far back amongst my records to collect dust. Recovering it finally, last week, and playing it again brought severely contrasting feelings, however. What had seemed unrefined seemed like simple dexterity. They lyrics ran through me like an electric shock, and I was transformed. All the songs are fast and brief, the lyrics angry but believable, and the overall tone is pretentiously intriguing. In essence, they are so imperfect, in fact horrid, that they're perfect. This is the kind of music to set you off violently thrashing and bouncing off the walls. These lads remind me a lot of Black Flag but still maintain a certain uniqueness.

I Hate It - a real remonstrating song. It leaves you asking, so you hate it, what the hell are you gonna do about it?

Aman - About a typical victim of this world's crap—just like everyone else.

American Youth - an air of triumphance. Gets point across without lament. It's an up-yours, we'll-show-you song and it gives hope to youths—probably why it's my favorite.

Dead Solger - the most musical, with strong bass. Has a cool ending.

I wish these lads had stayed around long enough for me to have seen them. Their music has so much force that I'm sure they were incredible live. We need more bands like this. This 45 is well worth $1.99—you can get it at most of the U. District record shops & at Corporate Records on 2nd Avenue. 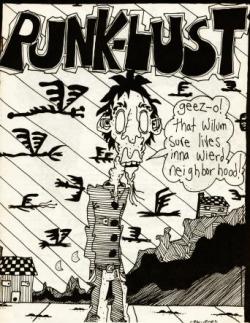 I'm not backing up on Raping Dead Nuns. I think it's maybe the best American punk song of the year. As for the feminists, I could give a fuck about them. I'm bored by feminism. I'm on their side, I already take equality and all that shit for granted. I've just had to put up with so many of them and their party-line, especially in sci-fi fandom. So what if Raping Dead Nuns offends them? It's not an anti-feminist song anyway, which they could see if they weren't so super sensitive. It's nothing more than a hilarious attack at one symbol of organized religion. I mean, it could have been Raping Dead Stenographers or Raping Dead Check-Out Girls, but it was nuns! It's so obvious that it hits you in the fave with an icepick. What's wrong with good old fashioned necrophilia anyway?

"Constantly badgered/Constantly abused
That's how it's always been/Tell me the truth
I stand in silent anger/Waiting for you."
—Crucifix, Permanently Damaged

'Frisco is fuckin' cool! I saw Flipper last night. GREAT show, punks everywhere, I mean they were hanging from the rafters. The F@rtz are real well-known here, and people are enthusiastic about 'em. I talked to people from the Fuck-Ups and a buncha regular punks, all of whom like F@rtz better than Dead Kennedys! I guess they put on a total killer show down here. I was at a table singing Got a Brain and Idiots Rule with some locals who had F@rtz armbands.

((Thanks Steve. Steve is the editor of a great punk, sci-fi fanzine called the Chicago Offender. It's free, but you shou'd send some stamps or buck$ to help pay the poftage. His address is:
Steve Duff,
Fox Div. USS Enterprise, EVN-65,
FPO San Francisco, CA 96636.))

It seems to me that any song called Raping Dead Nuns or most any song in this line of shock punk is not the "ain't nuthin' too sacred to a punk" type of thing. I alwaz looked at it with more of a "happens in the paper all the time" type thing. And fuck it, look how immune people are to giving a shit. I do believe I'm a sexist as far as humans are male and female & have roles to fill. We are made to compliment each other.

But Raping Dead Nuns is just another aspect of life that is sick and isn't that what the song says? It's easier to say this is right and wron rather than, hey, this exists, look. And that is punk. Look round at our beautiful world, people. Look at punks becuz we exist. We express what we see.

((Thanx, Vince; and thanx also for all yr cool artwork. I'm using yr mast murther ill as ye inside back-cover this ish—and will be using the rest in future issues.

Some people think that to discuss a song as old as RDN, or a single as old as ye Solger single, is stupid, that we shou'd discuss only new stuff and forget whut has been released months & months ago. But not me. Old punk stuff is just as valid to-day as it was when it was new.))

back to the article