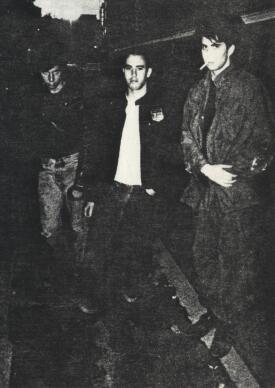 YOUTH BRIGADE and the BETTER YOUTH ORGANIZATION are two groups who have not received nearly enough credit in the annals of punk history. Both groups were run by the three transplanted Canadians, Shawn, Mark and Adam Stern (they're brothers), and both groups were contemporaneous, operating at their peak from 1981-1984 or so, but both have carried on to this very day, although not without some changes...

Youth Brigade were a band, a three piece punk rock group from California who played some really intense oi-tinged punk. BYO were a record label, promoter, and management team who were prime players (along with Minor Threat/Dischord and Black Flag/SST) in the DIY explosion of the 80's. BYO inspired a host of far-flung local chapters, from Philadelphia to Reno (Positive Force) to Ontario, and probably beyond (if you know of any other local chapters, email me), unfortunately only the original (California) branch is still around.

The history of the two groups begins on March 17, 1979, at the Elk's Lodge, in Los Angeles. The Alleycats are set to record their first album, absolutely live. Opening for them are the Plugz, the Zeros, the Go Gos and X--an all-star lineup of LA punk. Midway through the Plugz set however, the LAPD make an uninvited appearance, and break up the gig with their usual tenderness. Punks are beaten, arrested and thrown down stairs while the venue is trashed.

Shawn Stern, a young LA punk, missed that show, but was so outraged by the actions of the LAPD that he decided to form an organization to help punks help themselves...the seeds of the Better Youth Organization had been planted.

Autumn of 1979, Highland Ave., Hollywood. Shawn Stern (and more than a dozen other people) rent a small mansion and dub it the Skinhead Manor. The manor becomes a central meeting place for Hollywood punks, and several bands, including the Circle Jerks and the Stern brother's own (six-piece) Swing Skins Brigade rehearse there regularly. The Swing Skins Brigade is an attempt to fuse hardcore punk with swing--it never gets off the ground, and the band decide give up on the idea and the name. Shortly thereafter the Manor was abandoned, and the ex-Swing Skins got a new name--Youth Brigade.

Youth Brigade were a six piece for a few months, but slimmed down the just the three Stern brothers. They played California, often promoting the shows under the BYO banner and opening for out of town bands. During this period BYO arranged and promoted shows by the Angelic Upstarts, Anti-Pasti, the Circle Jerks, TSOL, Social Distortion and the Adolescents, as well as running Godzilla's, a bowling alley-cum-gig-space in the San Fernando Valley. The group's relationship with Godzilla's soon soured, and BYO went back to renting halls for shows.

In 1982 BYO put on a huge show with TSOL, Wasted Youth, Social Distortion, Youth Brigade, the Blades and AKA to raise money for the release of their first record, a compilation of local bands entitled "Someone Got Their Head Kicked In". The show was a success, but the venue refused to pay BYO due to a member of the crowd breaking her hip and threatening to sue. I don't know what happened to the lawsuit (or the money!), but the release of BYO's first record was delayed for several months. When it finally did make it out, it was followed quickly by Youth Brigade's first album--Sound and Fury.

The band weren't very happy with the release, but nonetheless embarked on a national tour with Social Distortion, driving across the country in an old school bus, playing shows, doing interviews and preaching the DIY ethic. The tour was video taped by Adam Small and Peter Stuart, and was eventually released (but not by BYO? Shame on them.) as Another State of Mind.

When the band returned to California (tired and worn out) they re-recorded Sound and Fury with a batch of new songs, and let the original version go out of print. While the original version was pretty bad, with occasional sparks of mediocrity, the re-release was absolutely mind-blowing--songs like Sink With California and What Will the Revolution Change cemented Youth Brigade's place in the punk rock pantheon.

[OBIK: As far as I know the biography I wrote is reasonably complete and accurate, but it's more than possible that there are mistakes and/or omissions. If you know of any, point them out!]

2002/10/12: Finally added images to all the interviews that originally had images. No, I won't tell you which ones.