The Fix's homecoming show was not to be missed--unfortunately it was marred by violence, as you can read below. 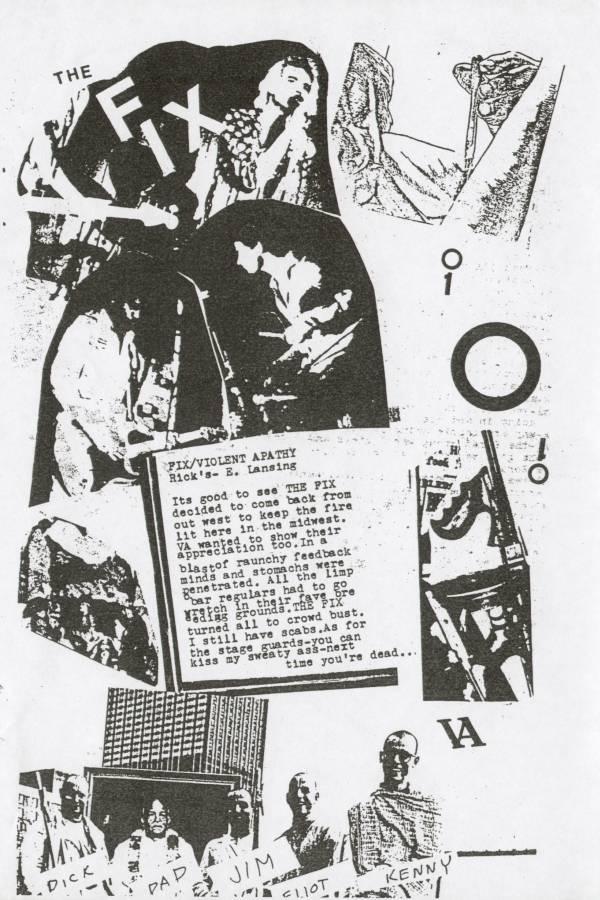 The Fix have finally returned for their successful tour of Texas, California (SF in particular), and the Northwest. They played the much-publicized Eastern Front in Fresno, and did some recording at Black Flag's studio with Spot. I've heard the tape and the improvement in sound over their single has to heard to be believed. It's frightening that they should sound so good. They celebrated their return with an amazing gig at Rick's American Cafe in E. Lansing. Not the best surroundings (tiny carpeted dance floor and a benignly mellow atmosphere) for their unsubtle brand of punk. Aggressive, uncompromising, violent--nobody does it better. An overpowering onslaught that literally rips the fixtures from the ceiling...the best in Michigan. I did get a bug up my ass about some self-appointed goons, taking it upon themselves to protect the band from the flailing throng on the dance floor. I trust the Fix had nothing to do with it, cuz this will sure as shit cause bad blood among their fans if they did. Brawny assholes grabbing people and pushing 'em back into the mass of slamming bodies, appearing to take great pleasure in their ability to police the stage. Just an excuse to throw their weight around...big jerks with small minds. Steve (Fix vocalist) told them to stop and leave us alone, but no, they had to have more. One of 'em got his kicks from punching girls; challenge him to step outside and he runs, only to return o throw bottles from a speeding car. Am I a fool to say I hope we don't encounter any more of this gestapo brutality and future Fix shows. We sure as hell don't need it.

To Readers of T&G:

The August 13 Fix show at Rick's Cafe seemed to draw a lot of fire on the Fix in regiard to the "goon squad"--two "brawny assholes" in particular. First of all to blame the Fix for the stupid actions of these people is ridiculous. We neither need nor want protection from our fans. I have much respect for our fans. It says a lot for people who support the scene in such a culturally backwards and conservative area like the midwest. No, we did not set these people up for our protection. Yes, they did take it upon themselves to protect the band. They are acquantances of the band who have no understanding of the scene. That is their problem. They now know they are no welcome. Nuff said.

Thanx for coming to the show. FUCK EVERYBODY ELSE...