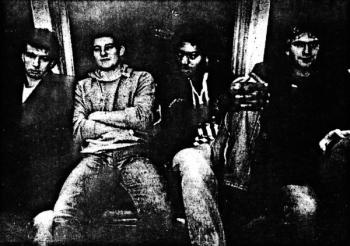 In 1980, the publishers of a fledging music magazine from Lansing called Touch and Go managed to catch a show by the newest punk band to come out of Lansing--the Fix.

Touch and Go, published by the dynamic duo of Robert Vermeulen (a/k/a Tesco Vee) and Dave Stimson (a/k/a DS) latched onto the band's ferocious, lightening fast music, and they were logical candidates for release on the nascent Touch and Go records. In March or April of 1981, the Fix's Vengeance 7" was pressed in ridiculously small quantities and unleashed on the world. Despite positive reviews and the fact that it sold out in a matter of weeks, the record was not repressed and was impossible to find by October of that year.

Based on the strength of the 7", the Fix toured the US in the summer of '81, hitting various cities in the midwest, southwest, northwest, and California. While in the Los Angeles, they recorded seven tracks with Spot, the [in]famous house producer for SST records. The results of that session, circulated on tape, were widely regarded to be the Fix at their peak, and four tracks were selected for release on a second 7", the mind-blowing Jan's Rooms EP.

Before Jan's Rooms would see release, however, the Fix recorded one more song, No Idols, for the Process of Elimination 7". The two records were released within weeks of each other and the Fix embarked on another national tour, at least part of which coincided with the Effigies first tour. When they returned, they lost their drummer and placed an ad in Touch and Go seeking a new "skin man (or woman) with the right attitude" and saying that "touring, videos, and recording is imminent," unfortunately they couldn't find a suitable replacement, and split.

Afterwards Craig backed Jan James in a succession of bands (and still does). Mike played with the Meatmen on their Crippled Children Suck 7" and the Process of Elimination tour (which is where the live portion We're the Meatmen...And You Suck was recorded). Mike and Steve played in Blight with Tesco Vee (and later without Tesco), and had a band of their own, Just Say No, in the mid-80's. Steve was in Strange Fruit later on, and Mike was recently in the Monokulators. Steve is currently a journalist, Jeff's a realtor in scenic Lake Charlevoix, and Craig still plays guitar.

Added some pages from the Fix ledger to the Thrash Tour page.

New design. Added my interview with Steve. Added the shows section and a bunch of interesting gig-related ephemera: some concert contracts from 1980, the Eastern Front program, and so on.

Reward (that means cold, hard cash) offered for ANY Fix interviews, reviews, flyers, pictures, or advertisements. Premium prices paid for original material and fair trades done for copies. I will also drop signifcant loot for an unused Vengeance sleeve, as well as any test pressings or rare variations--if you turn up a copy of the first Jan's Rooms insert without spraypaint you're lookin' at a bundle o' money. I'd also love to trade for any tapes--live, rehearsal, studio and especially VIDEO (I know the Eastern Front '81 gig was video taped by Lynn Lust, and there was some other video floating around in the eighties). Drop me a line if you can hook me up.

As far as I know the information on this page is accurate and complete, but it's more than possible that there are mistakes, and it's a certainty that there are omissions (particularly in the gig list). If you spot any, email me!

Special thanks to Steve Miller and Mike Achtenberg for the interviews, Tim Tonooka for permission to reprint the article from Ripper, and Messrs. Vee and Stimson for their kind words. Reg'lar ol' boring thanks to Kenny Knott, Jason Litchfield, Craig Calvert, Jeff Wellman, and the assorted folks whose paths have crossed with both the Fix and myself... 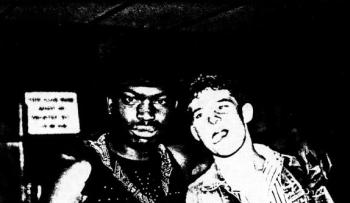 These guys are it, pure and simple. The only local band worthy of coverage in the exalted pages of T&G. And don't give me no shit about bands like Trainable, the Whoremones, Eddie Puke, etc. They just don't measure up. Joke bands are fun maybe once, but you sure as hell can't subsist on a steady diet of that junk. They're just dabbling in this new music thing...too timid to attack it head on. And that's what seperates the Fix from all the rest.

Lansing has a long way to go as far as a respectable scene is concerned. That is, if you could ignore the Fix...

STEVE: What about it?

JEFF: All of my straight friends say it sucks. Really my roomates liked it...surprisingly...

This press kit was sent out in '81, not sure exactly when (probably just before their last tour).

These guys play with an intensity and ferocity that's rarely seen, just flat out incredible. Lethal vocals and speeding guitar noise, one hell of a savage sledgehammer attack.

STEVE: We went down to this studio in Chillicothe and it was pretty good. The first night we were there Craig got really really drunk. We were drinking whiskey and beer he'd stacked up all these amps--he had a real wall of sound going, it was harder back then to get that wall of sound, and we thought you just had to stack all the amps up and just wail, so he'd cobbled together everything that he could--and then he fell backwards into it, and those guys were really worried, they were asking Jeff, "Are these guys gonna be okay?"

I recorded the vocals in a booth which was really cool, and I remember I turned out all the lights. I wanted to be in there pitch black, just my headphones, me, and twelve beers--I'd lined 'em up inside the booth after every take.

Anyway it was great--we just did what we had to do. 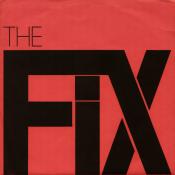 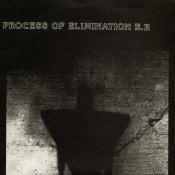 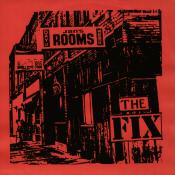 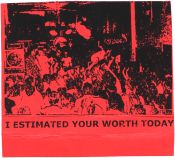 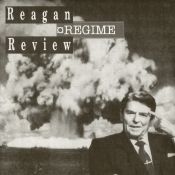 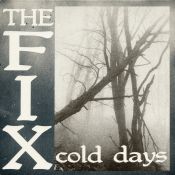 Fix tracks have also appeared on a number of Killed by Hardcore type compilations. I haven't listed any because they're like cockroaches--you think you've nailed 'em all and then up pops a new crop, worse than the last. Fucking bootleggers. 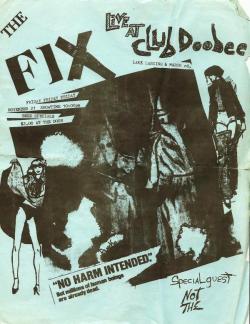 sometime in April in a basement in East Lansing

May 30 with Trainable @ Lansing Civic Players Hall in Lansing

Summer, in restaraunt's a backroom in Lansing

Tesco sees the band. Show ends early due to violence.

September with the Necros in a basement in Lansing

September 26 with the Necros @ Club Doobee in Lansing

November 11 with the Lordz @ the Red Carpet in Detroit

November 21 with Not The @ Club Doobee in Lansing

December 7 @ the Red Carpet in Detroit 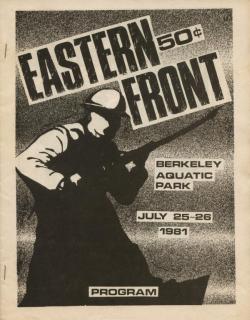 a Thursday and Friday in February @ Oz in Chicago

This is what punk rock's all about: Some obscure band from California playing with two unknown midwestern bands and passing along contacts for punk-friendly venues all the way to the West Coast...

May 1 with the Necros, DOA, L7, and Jan and Dean's Living Room in Lansing

June 20 with Trainable? in Grand Rapids

This tour, along with Husker Du's adventures this summer, introduced a sizable portion of the country to midwestern hardcore. Some of the dates listed are speculataive...I've got them from various sources, but Steve doesn't remember them... For more info see the Thrash Tour page.

June 24 with the Subverts and Red Squad @ O'Bannion's in Chicago

June 26 with the Stains @ the Island in Houston

June 27 with Dicks @ Duke's in Austin

June 30 with the Embarrassment in Oklahoma City

July 2 with JFA in Phoenix

July 4 with the Dead Kennedys and 7 Seconds in Fresno

The Eastern Front punk festival was one of the first and largest punk festivals held in the United States. Contemporary efforts, including Hardcore '81 in Vancouver, and the Nowhere festivals (Nowhere '80, Nowhere '81, etc.) in Akron, managed to pull together a surprising amount of talent and support, but the Eastern Front dwarfed them all. Hardcore '81 was eight bands over two days in a small punk club--five of the acts were Canadian, and Black Flag, No Alternative, and 7 Seconds held up the side for America. The crowd was small but enthusiastic. Nowhere '81 pulled together eight Ohio bands, a couple hundred fans in a rented hall, and spawned a cassette-only document recorded through the soundboard.

The Eastern Front was another beast altogether: seventeen bands over two days (including acts from England, Reno, Vancouver, Lansing, and a plethora of California talent). Color posters, printed programs, and a lot of attention from the local punk press insured that at the very least everyone would know about the show, even if they didn't show up. It was held outdoors at the Berkeley Aquatic Park, and thanks to the promotional blitz, it was a pretty amazing success. The gig was professionally recorded, excerpts were released on LP, and the Eastern Front became something of an institution--the next year Husker Du, Chron Gen, and several other worthies played...

September 5 with the Alleycats @ Bookie's in Detroit

The band bailed on the Bookie's show and played the Coronation instead.

September 26 with the Necros, Violent Apathy, and maybe some Kalamazoo bands @ Don Neal's in Kalamazoo

early October with some of the Process EP bands @ PRT Club 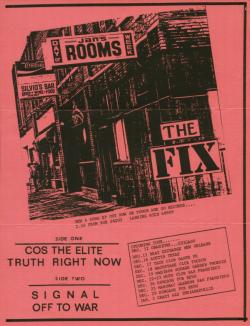 The Jan's Rooms Tour changed its shape pretty radically as shows were added, canceled, and moved around. I've only listed the shows that did happen here, but if you're interested in everything that didn't, there's a full breakdown on the Jan's Rooms tour mailing page...

Band did not get paid...

December 15 with the Sluts? @ Beat Exchange in New Orleans

December 18 @ the Backstage in Tucson

December 22 and 23 in San Francisco

These two shows may be at the Sound of Music or Valencia Tool and Die...

Unscheduled gig. The final Fix show. The party at Ruth Schwartz's house the night before may have something to do with Steve's hazy memory of the gig itself.

Kill From the Heart