I ESTIMATED YOUR WORTH...: 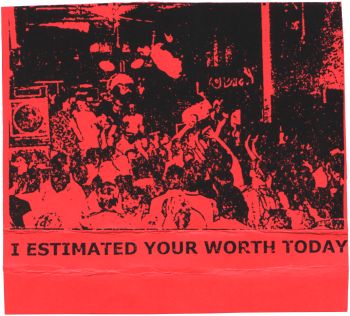 V/A - I Estimated Your Worth Today CS:
Fix songs: Vengeance / Truth Right Now / Famous / Off to War / Rat Patrol / 'Cos the Elite / Signals in Distress
no record label, number or year

Recording notes: The Fix songs are the Spot sessions, and some of 'em appeared on the Jan's Rooms EP and Cold Days CD/LP--Vengeance is the only exclusive track. Quality is somewhat sub-par--lots of hiss and the bass is too loud. It would be nice if Vengeance got an official release some day, since it's much better than the 7" version.

Notes: The cover is one of the images from the Negative Approach 7" insert.

Probably not an "official" release, but done by someone who was involved in the early 80's Detroit scene. Tape dates from 1983 at the earliest (after many of the bands featured had broken up), but is probably from much later though (mid-to-late 80's? Early 90's?).

More information would be appreciated.

A scan of the insert/tracklist is available.