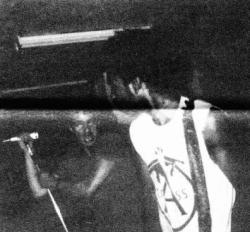 I don't have the zine in front of me right now, but BW is Bessie Wreck, and Johanna was the editor, I think. No idea who JJ and TL are.

The Fix were interviewed after they played at the Eastern Front in Berkeley on July 25th. Members of the Fix are: Steve - vocals / Craig - guitar / Jeff - drums / Mike - bass (not interviewed) / Jon - manager

BW: Talk and we'll put this at the beginning

STEVE: Well, you gotta ask me something first.

BW: You have to make an introduction.

TL: You have to make up your own questions, don't you know that?

STEVE: I can't do those kind, I'm not very good at that.

JON: I'm wearing it for him.

STEVE: Who are the Wrecks? (looks at Bess' shirt.)

STEVE: Really? I've never seen 'em. Are you in it?

JON: You were told that. Too many beers.

BW: You were told about that... What was he told?

JON: I'm sure I told you about that.

STEVE: Nobody tells me anything.

STEVE: It's terrible, we can't play anywhere. We just got a $200 guarantee in Lansing, only becase we came out west. That's the only reason.

BW: are there any other bands there?

JOHANNA: Why don't they ever come up here? Do they?

STEVE: No, they're all fuckin' stupid. They jsut sit around.

TL: What's the difference between punks in the east and the west?

CRAIG: It's pretty dead in the east.

JEFF: (yelling) There are none in the east!

STEVE: Yeah, the ones in the west are alive, they know what's going on and you can talk to anybody. The ones in the east are, like, fucked.

CRAIG: DC is supposed to be real hot. Never been to the east myself. I know the midwest is pretty shitty.

TL: Are you gonna be moving out west?

JEFF: We are in a coule years.

JOHANNA: Are you all gonna live in the same house?

JJ: Johanna, if they're moving at the same time...

TL: What bands influence you the most?

STEVE: Well, like in the east, nobody knows about Discharge.

JJ: Oh yeah, we know everything.

TL: What other bands have played in Lansing?

STEVE: Oh god, those guys are the worst.

TL: What did you think of SF? I think you already answered that.

STEVE: Oh, it was the best town I've ever been in.

STEVE: It was my favorite town ever, ever in my life.

JEFF: Hey, Reno is good, but Ma Seconds was better.

TL: Was it friendly to you?

STEVE: Yeah, very nice 24 hour town. You can get beer any time you want.

STEVE: Oh, I could get used to that real fast.

TL: When was your single recorded?

TL: Why were there so few made?

STEVE: Cause we're from the midwest and nobody liked us, so we didn't think anybody'd buy it. When it sold out and we got rid of 'em all, we freaked out.

TL: Are you gonna get any more made?

STEVE: No, we're gonna get an EP made.

JJ: After you're stinking rich.

STEVE: Yeah, that sounds alright. The EP's got one of the same songs on it.

STEVE: Vengeance, which is In This Town, but that's too long to explain. They got pressed on the wrong side.

STEVE: Alright, yeah, In This Town is Vengeance and Vengeane is In This Town. Oh, this'll be great, everybody will be together on that finally.

JJ: OK, since everyone reads this fanzine. (haha)

TL: Who would you like to be trapped in an elevator for a weekend with?

STEVE: How about Sophia Loren?

JJ: Oh, gross! Oh well (to Craig), who would you like to be trapped in an elevator for a weekend with?

CRAIG: Let me see. I like Jeff a lot. Mike's pretty nice too.

JJ: Do you have anything you'd like to expand on?

STEVE: No, never. Can't think of anything.

(At this point another band started playing, so we had to stop.)