The first time I heard the Fix, on their debut single, "Vengeance"/"In This Town," I was totally knocked out. These guys play with an intensity and ferocity that's rarely seen, just flat out incredible. Lethal vocals and speeding guitar noise, one hell of a savage sledgehammer attack.

They come from Lansing, the capital of Michigan, a state devastated by the current slump in the auto industry. Auto sales have plunged to the lowest they've been in 21 years, and unemployment there is the worst in the country.

The first time the Fix played in the Bay area was last summer at the Eastern Front show. They're one of the most awesome bands I have ever seen. The forcefulness with which they deliver their songs in unreal.

The next time the Fix were out here was last winter. They did several gigs in San Francisco, including the New Year's Eve blowout at the Factory (one shot venue) in SF, where they opened up for the Effigies, Anti-Pasti, Flipper, and the Dead Kennedys. They show started earlier than I expected, so I missed most of their set and didn't get any live photos. But at least I got an interview, and they'll probably be back out on the coast by this summer.

Aside from playing the Bay area on both of their tours, the Fix have also played Austin, Houston, New Orleans, and around the Midwest, but they haven't played in LA yet or out east.

While their sound may be similar to a lot of the LA bands as far as its "thrashability" is concerned, there's a certain uniqueness to it that the Fix are very proud of. They've been together two years, and in their early, formative, stage they were not exposed to west coast bands like Black Flag or the DKs. They just practiced in their basement and developed their own sound free of outside influences. They were the first real punk band in their local area.

Since Craig is one of the few black people involved in the punk scene, I asked him what other black people have to say about him being in a punk band. he replied, "It's got something to do with when I grew up in Chicago. The neighborhood that we grew up in was SO fuckin' dangerous that my mom sent me to a private Catholic school. So that growing up around 7 or 8 years old, I was hanging out with mostly white kids, and so instead of listening to the Spinners, I heard a lot of other stuff too. Most of the black kids I know no, they know I'm in a band, and they know I don't look like they do, but I don't think they really understand the things that we're standing up for. If they were thinking, they would know that what I'm standing up for is standing up for them in a sense, against the culture that's squashing us both. I don't think they can recognize that."

The Fix recently released their second record, a 7" EP called "Jan's Rooms." It has four songs--"Cos the Elite," "Truth Right Now," "Signal," and "Off to War." This is really outstanding, more blinding fury and blast furnace intensity. It's raw edged and totally straightforward.
STEVE: The title "Jan's Rooms" comes from a boarding house in the sleaziest part of Lansing, Michigan, which is the sleaziest part of the country, it's just a pit. And Jan's Rooms is a rent-by-the-hour rooming house in the working district of Lansing.
CRAIG: You can stand in the window of Jan's Rooms and see the Capitol. Okay, here's the Capitol, where the shit's going down with the government, all the heavies and people that are controlling the money. You look down from that and you see Jan's Rooms where all these fucking bums live who are working victims of the government. It's a real good parody, just like DC where you see the White House and two blocks later there's hardcore slums. That's why we decided to use Jan's Rooms. It typifies what's going on with this town, what we're up against.

The Fix also have a great song called "No Idols" on the new "Process of Elimination" EP from Touch and Go Records. Also featured on this 7" compilation are the Necros, one of the first hardcore bands in the midwest. Also represented are some of the new hardcore bands that have sprung up in the southeastern Michigan region--Meatmen, Negative Approach, Youth Patrol, Violent Apathy, and McDonald's, along with Toxic Reasons from Dayton, Ohio.

A lot of young kids in the midwest are into it, but at present "there's no town out there that has a consistent, weekly show scene going on," says Craig. "We play about once a month out there, and everybody else does." The midwest is ripe for action, and bands like the Fix intend to kick it off into its full potential. 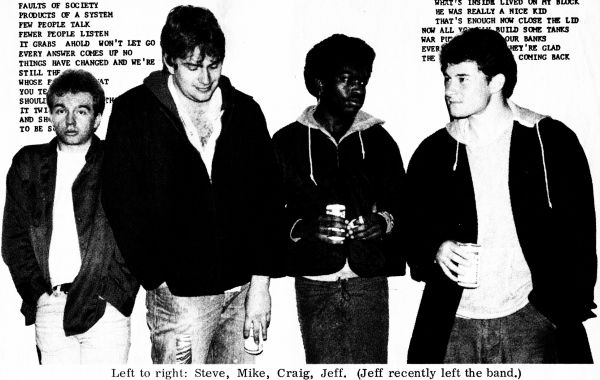