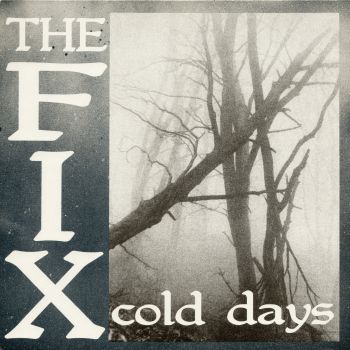 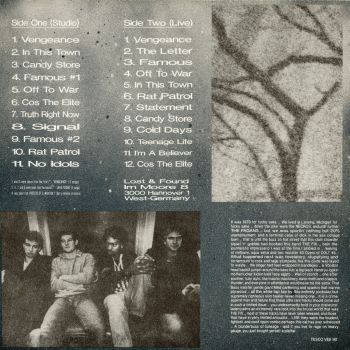 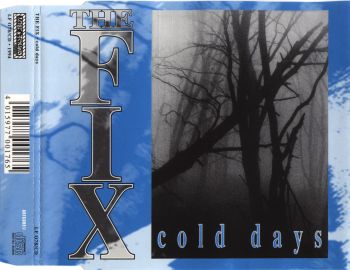 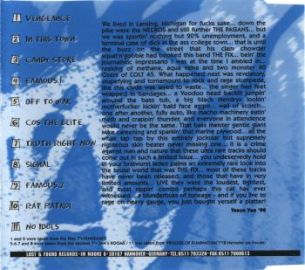 The studio material includes all of the band's Touch and Go output plus bonus tracks from the Vengeance 7" and Jan's Rooms sessions. The Vengeance stuff is beefier sounding than the 7", but the Process and Jan's Rooms tracks sound identical. Two studio tracks were left off--an excellent version of Vengeance that was recorded with Spot in LA and another take of No Idols from the Process EP session. Vengeance is circulating on tape, but the alt version of No Idols isn't, and I don't even know if they bothered to keep the second take or not (all the Detroit bands recorded their Process EP songs at the same time--each band got two tries, and the best one was used).

The live stuff sounds a lot like early Husker Du, but with much better sound quality. Frantic, energetic noize.

"We lived in Lansing, Michigan for fucks sake... down the pike were the NECROS and still further THE PAGANS... but we was sportin' nothing but 20% unemployment, and a terminal case of dick in the ass college town... that is until the buzz on the street that his clam chowder squat'n'gobble had booked this band THE FIX... bein' the journalistic impressario I was at the time I ambled in... reeking of methane, aqua velva and two monster 40 Ozers of COLT 45. What happened next was revelatory, stupefying and tornamount to rock and rage stumpede, like this clyde was layed to waste... the singer had feet wrapped in bandages... a Voodoo head backlit jumpin' around the bass tub, a big black Hendryx lookin' motherfucker kickin' bald face aggro... wall of scorch... one after another, fully auto, like macho machinery eatin' meth and crappin' thunder, and everyone in attendance would never be the same. That bass meister gentle giant Mike careening and spankin' that marine plywood... all the while tap tap by this entirely jockular but supremely righteous skin beater never missing one... it is a crime against man and nature that these ultra rare tracks should come out in such a limited issue... you undeservedly hold in your bratwurst laden palms an extremely rare look into the brutal world that was THE FIX... most of these tracks have never been released, and those that have in very limited amounts... LIVE they were the loudest, tightest, and most rippin' combo perhaps this cat has ever witnessed... a blunderbuss of tuneage - and if you live to rage on heavy gauge, you just bought yerself a platter!"
Tesco Vee, 1990