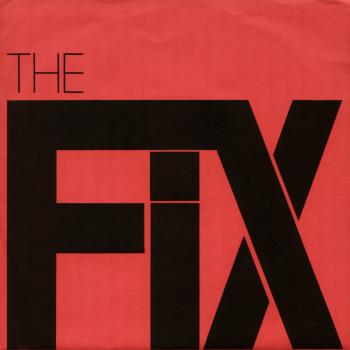 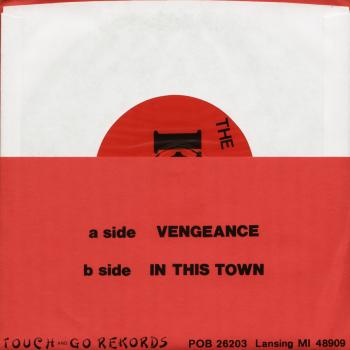 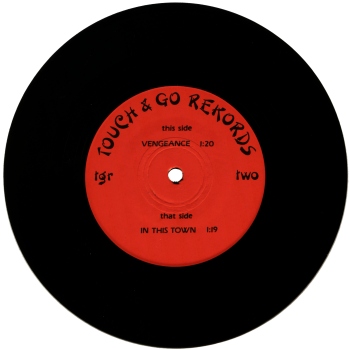 Recording notes: Recorded late '80 (four songs were done in all).

Notes: A and B labels are flipped. No insert. Touch and Go Rekords is spelled with a K instead of C because Dave Stimson ran out of Cs when he was making the sleeve.

I'm not aware of any variations for this record.

Lyrics for Vengeance are available, as is one tiny ad for the 7" from Touch and Go 13.

This hardcore Midwest punk band has that great buzzing guitar sound that is so popular here in DC. The songs are fast and raw and hopefully representative of what is to be coming out of the Midwest in the months ahead. Write to Touch and Go and get it. It's worth it.
--Bert, Capitol Crisis 5, May, 1981

The Necros kick off festivities with some torrid, if spottily produced, muscle-head ass-whippin'. Fast, terse, angry--predictable but heartfelt. [...]
Fellow Michigoans The Fix acieve a fuller, deeper sound on their "In This Town" c/w "Vengeance" debut. They also benefit from exceedingly nasty sounding lead vocals and a crafty drummer who adds much needed variety with some well placed rhythmic shifts.
--Howard Wuelfing, Discords, May, 1981

Faster and younger than the Ramones, these boys from Lansing, Michigan give us two sides of vinyl and finish it all in two minutes and thirty-nine seconds. This is so fast that you won't even have a chance to sit down, so you better dance with your turntable. This is basic, no frills hard punk and proves once again that punk still goes on five years after the initial English explosion.
--Sinclair Elrod, Coolest Retard 14, June, 1981

A hardcore classic--the greatest thing I've ever heard from the midwest. Totally raw, savage, and intense. A hot band live, too, so don't miss them. Trivia buffs note--the labels are on the wrong sides of the record. All copies of this may be gone by now, but look for a new 12" EP with about seven songs on it.
--Tim Tonooka, Ripper 5