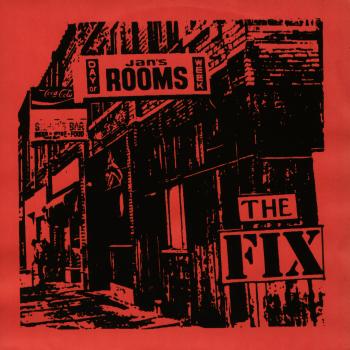 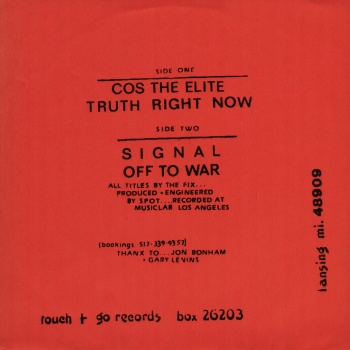 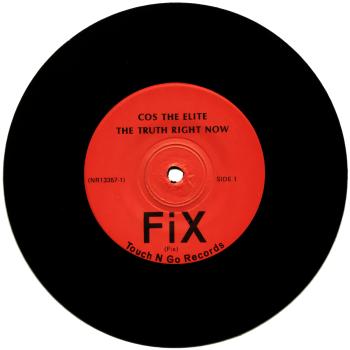 Recording notes: The tracks were recorded in June? of 81 while the band were in LA.

Notes: Signal is called "Signals In Distress" on the record label, as well as in an MI scene report I have. The cover shot first appeared as the cover of Touch and Go 8.

There are two known inserts, the first (and rarer) being an 8.5x11 sheet of paper with the lyrics printed in green ink and decorated with spraypaint (some hand colored by the band, too). Early copies of the spraypaint insert had silver spraypaint, later ones were black (possibly other colors as well?). The spraypaint was to cover up a Fix logo that the band didn't like. The second was a 5.5x8 sheet with the typed lyrics and a picture of a mace. The second insert has a thanks list whereas the first does not. The records are identical.

I liked the Fix's first single for Touch and Go and this 4 song EP is also good, produced by Spot, who's done work with Black Flag, among others. Fix singer Steve has his "hardcore howl" down pat, a growl to be heard above the thrashing band. "Signal" starts slow and menacing with a great drum song--a change from the usual bash-em-up approach--although they go wild at the end of the cut. "Off To War" puts the current tide of militarism in perspective: "Now all you can build some tanks / War puts money in the banks / Everyone will say they're glad / The winners won't be coming back." Recorded in LA.
--Trashland Adventures 4

THE FIX: You've no doubt heard of them by now. They toured the country this summer, played in SF, Arizona, Reno, Texas, etc... Some of their songs sort of sound like Discharge, but still have an original style. The sound on their new tape (which will be pressed soon) can be described best this way--everything ugly and uncomfortable about the world inside of an army tank that's on an attack on a battlefield. Songs: Off to War, Signal in Distress, Rat Patrol.
--Barry Henssler, Noise 6

The Fix have finally returned from their successful tour of Texas, California (SF in particular) and the Northwest. They played the much publicised Eastern Front in Fresno, and did some recording at Black Flag's studio with Spot. I've heard the tape and the improvement in sound over their single has to be heard to be believed. It's frightening that they should sound so good. They celebrated their return with an amazing gig at Rick's American Cafe in E. Lansing. Not the best surroundings (tiny, carpetted dance floor and a benignly mellow atmosphere) for their unsubtle brand of punk. Aggressive, uncompromising, violent--nobody does it better. An overpowering onslaught that literally rips the fixtures from the ceiling...the best in Michigan. I did get a bug up my ass about some self-appointed goons, taking it upon themselves to protect the band from the flailing throng on the danve flood. I trust The Fix had nothin' to do with it, cuz this will sure as shit cause bad blood among their fans if they did. Brawny assholes grabbing people and pushing 'em back into the mass of slamming bodies, appearing to take great pleasure in the ability to police the stage. Just an excuse to throw their weight around. Steve (Fix vocalist) told them to stop and leave us alone, but no, they had to have more. One of 'em got his kicks from punching girls; challenge him to step outside and he runs, only to return to throw bottles froma speeding car. Am I fool to say I hope we won't encounter any more of this gestapo brutality at future Fix shows. We sure hell don't need it.
--Dave Stimson, Discords, September, 1981

These guys have the most savage, raw sound you can imagine. It's fierce, powerful stuff that'll burn holes in your ears. The singer has the most raw sounding voice you've ever heard, and does he ever roar! There's four great songs here, including "Off to War," which they wrote after registration for the draft was reactivated, and "Cos the Elite," about the power of the rich. Overall, an outstanding band that deserves your support.
--Tim Tonooka, Ripper 7

Another great one from Touch and Go, who are doing a great job of documenting the midwest to vinyl (look for EPs by Meatmen and Bored Youth in the near future). This four song EP was produced out on the west coast with Spot at the controls... I don't care for the production, too much bottom end and the mix is kinda sludgy. The Fix have a definite English feel to them, sort of like Discharge (yes, another lame Discharge comparison) most evident in the vocals. "Signals in Distress" is my favorite cut. It starts out real slow and dirge-like with a real powerful sound.
--Jimmy Johnson, Forced Exposure 1

Should get this before it's no longer in print. The Fix has broken up so you'll never get a chance to hear how great they are.
--M. Mayhem, Twisted Image 3