Har har, Roland's back and kicking ass. More Bulldozerish noise from the boys, but with a lot more rage. My personal feeling is that this is much better than Bulldozer, the songs are meatier, the sound is nastier and Steve's snarl is in fine form. Shotgun, Sleep and Racer X are the stand-outs.

Il Duce was also recorded with these tracks, but didn't see release until 1985.

The Homestead version features a cover by Nate Kaatrud, and according to Steve, the reason the Touch and Go re-issue has a different cover is because the Homestead art was lost. It's more likely that Steve's falling out with Nate (better known as National Kato of Urge Overkill) had something to do it.

There seem to be a lot of Homestead copies out there that are missing the insert--it's possible that Homestead printed up a batch without the insert. They were a rather scummy label.

It would probably be easiest to skip this one and avoid charges of favoritism, but the point of this magazine is to expose the most interesting music and if we avoided a record as powerful as this just to guard against such accusations it would be kind of hypocritical. Anyway, Big Black takes no prisoners here. The title of the last release, Bulldozer, probably should have been saved for this one--that gigantic steamroller guitar sound flattens everything in its path without allowing anything to escape. My favorite is probably "The Ugly American," a piece of incessant anarchy topped with a killer one-note underwater sax line. I'm not sure how Big Black will manage to get more extreme next time out.
--Glenn Kenny, Matter 13

BIG BLACK provide a bitter rejoinder to the smug confidence of machine pop. Their metal junkyard of monosyllabic harmonics and decayed muzak revels in its own ugliness, an unrepentant and drooling bete noir with ingrown hangnails for a brain and blood on its hands too ingrained to wash off. Discordant guitar seems to snicker malevolently over an ice-cold drum machine and clanging bass as the title track heralds two sides of technology run amok. Then it gets more-of-the-same, only worse.

Luckily, Big Black make no concessions to music, so the listener is forewarned and forearmed after about ten seconds of any song. Melody gets short shrift, dissected piecemeal and reconstituted into abrasive swathes of noise interspersed with garbled shouting--the like of which only France's neglected Warum Joe have previously approached. With malicious relish, these rather anonymous folk sit on their subject matter like All-Star wrestlers, their robot pens etching perverted anthems with glee, regurgitating their stifling culture with a vengeful laissez-faire. It sounds like the taste in your mouth after 12 hours of sleep, stale and thoroughly reprehensible. An industrial accident soundtrack.

One recalls the moment in Animal House where Dean Wurmer delivers his deathblow to the reprobate frat with the ominous words "No more fun of any kind!" Now I know what he meant...

BIG BLACK, "RACER X" (Homestead)
Finally--a rock critic that puts his guitar where his mouth is! Most rock critics spend their lives whining and pushing up their glasses. Not Steve Albini - he went out and got a geetar and plugged it in and now demonstrates how to clear an entire town using only your basic three minute rock song format.

Fire up the heart attack drums, call up Dial-A-Bassline, turn every knob you see up to 10 and start blasting and screaming at the moon! The utter simplicity of it all! Gaaaaa!

This record will make your ears bleed, it's a 10, put it on and listen as the beeg feelthy guitar commands you to KILL! KILL!! KILL!!!

the guy was just plain cool, see. he was rex, speed racer's brother, but nobody knew it. it was a big secret, really big. speed racer was a pansy-ass wimp next to racer-x. speed, spying, machinery, little beads of sweat--he had it all. he was hooked on the excitement. hooked on the speed. hooked.

gangster social intercourse is pretty simple. no delicate conversation, no allusions or euphemisms, just demands. all your average news stand owner has to worry about, for example, is some hirsute ape who wants to widen his asshole with a cut-down shotgun. almost romantic, that job.

europeans, and americans who want to sound like them, spend a lot of time attacking the ugly american for his lack of culture. this, from people who change their governments like we change our underwear, and whose societies force thousands into lives of begging submission and menial pandering to the very american culture they profess to hate. feh. as durango says, the middle class is the same everywhere, but won't admit it.

fundamental question of human existence #1: what the fuck is death all about, anyway? is it the nap after a hard day's work? is it the reward for staying alive long enough to crave it? maybe the punchline to an over-long joke ("so, you've spent 40 years getting shit together, probably didn't count on this, did you, motherfucker? hahahaha!"). fundamental question of human existence #2: do we deserve the consequences of our actions, or are we fucked from day one? revenge is the motivator. the sleep is the payoff.

the big payback (james brown). okay, so we elaborated on the lyrics a little. sue us. the godfather was winging it most of the time anyway. 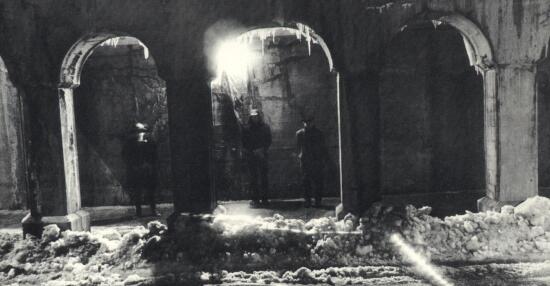 BIG BLACK'S address is (and always will be) post office box 442, evanston, illinois 60204 usa. we're friendly, but lethargic, so it may take a while to get an answer.

other great bands you ought to get familiar with: rifle sport, man-sized action, bloodsport, killdozer, breaking circus, nadsat rebel (hey, there's something in my oi!), squirrelbait, huge overcoat, circle seven (your check's in the mail), ashes of them, rights of the accused, naked raygun (world domination in '85), effigies (listen man, for a start...), savage beliefs, whole lotta loves, end result, pile of cows. hellos to jack rabid, terry and chris, liz phillip (but shteeeeev...), tesco vee, byron coley and his concubine jimmy, surfers of the butthole, sonic youth, corey rusk, jody kurrila, the minneapolis supper club, lyle "big guitar" preslar and all our respective bosses and squeezes. the next one's gonna make you shit yourself.